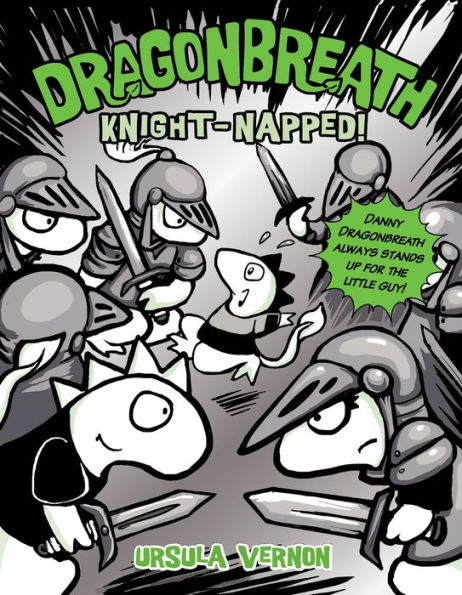 “Danny Dragonbreath had enough problems. He was the only dragon in [a] school full of frogs and lizards, he couldn’t breathe fire very well, and he was pretty sure that he had just flunked a pop quiz. Having a pigeon on his head was one problem too many.” –Knight-Napped

A pigeon lands on Danny Dragonbreath’s head and refuses to fly away. Attached to the pigeon’s leg is a note from Danny’s cousin, Spencer. Knights have kidnapped Spencer and they plan to slay him soon. Danny’s friends Christina and Wendell reluctantly agree to help Danny free his cousin Spencer.

Christina discovers that her relatives are the ones keeping Spencer locked in the tower. But before they can all save Spencer, Danny and Wendell are imprisoned in the dungeon. Christina is upset when she finds out that her relatives “are in the habit of kidnapping little kids and imprisoning them in towers.” In order to gain her family’s trust and free her friends, Christina pretends to hate dragons.

Danny, Wendell, and Christina all know their mothers would be upset to learn that they took a bus to Castle Wanderpool, but they need to save Spencer. Danny tries using his fire breathing skills to break out of the dungeon, but he only succeeds in catching the dungeon on fire. When Danny is thrown into the dungeon he thinks it’s “nothing compared to what his mom would do if she found out he’d been randomly breathing fire on people.”

Knight-Napped is full of surprises, fake fights, and friendship drama that will have readers laughing out loud. Danny’s story is told in a unique style that blends graphic novel and novel format. The text is broken up with illustrations and has several graphic novel scenes with speech balloons. The blend of text and pictures will help keep reluctant readers engaged in the story. The comic-style illustrations are mostly black and white, but they also have a pop of green.

Readers will laugh as Danny reluctantly tries to save Spencer. Danny “didn’t always like Spencer, but leaving him in a castle where they stuck dragon heads on walls—no. Just no. Danny Dragonbreath had his limits. He was going to get Spencer if he had to climb up the outside of the tower by himself.”

Danny, Christina, and Wendell’s adventure through the castle is hilarious. Readers will appreciate how the young knights try to satisfy their grandfather’s desire to have Freddy slay a dragon. Readers will relate to all of the characters—dragon, iguana, and knight—who are all afraid that their mothers will find out about their adventure. Knight-Napped is a wonderfully ridiculous, humorous story that will keep readers engaged until the very end. If you’re looking for a fun book series that kids will love to read, the Dragonbreath series is perfect.

“Danny Dragonbreath had enough problems. He was the only dragon in [a] school full of frogs and lizards, he couldn’t breathe fire very well, and he was pretty sure that he had just flunked a pop quiz. Having a pigeon on his head was one problem too many.” –Knight-Napped