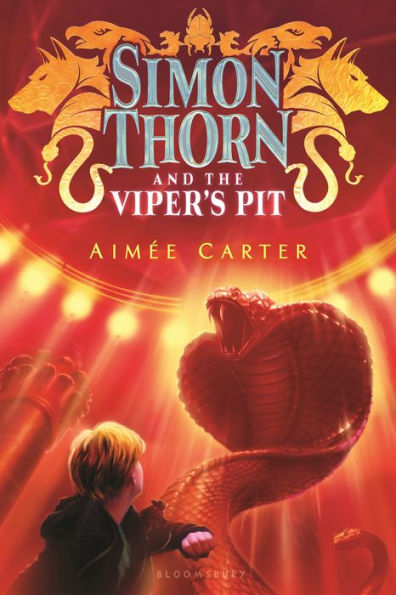 “Awesome people aren’t bullies. Awesome people are accepting and nice and don’t call people traitors or Mutts or act like the world should revolve around them, because it doesn’t,” Simon. –Simon Thorn and the Viper’s Pit

Simon Thorn and the Viper’s Pit

Simon Thorn recently discovered that he is an Animalgam, a secret race of people who can change into animals. Now Simon is going to school at a secret Animalgam academy, which is hidden under the Central Park Zoo. Even though Simon does not get along with his newly discovered Animalgam brother, he makes some true friends as he learns about his new power and learns how to fight.

But life still has challenges. Simon’s evil grandfather, Orion, killed Simon’s uncle and took his mother captive. Orion wants to rule over all Animalgams, but to do so, he needs to find all of the pieces of the predator—a terrible weapon that will change the Animalgam world forever. In order to stop this, Simon is determined to find his mother and the pieces of the predator. Simon and his friends head across the country, battling not only the bird kingdom but rogue Animalgams as well. Can Simon and his friends work together to overcome dangerous enemies, torn loyalties, and unexpected setbacks?

Simon Thorn and the Viper’s Pit has the same cast of characters as the first book in the series and adds a few interesting new characters. Each character has their own unique ability, which allows them to work as a team to get out of dangerous situations. As the kids race across the country, they must avoid the bird kingdom as well as other mammals. This conflict adds non-stop action that involves more running away than actual fighting. At one point along the way, Simon is told, “Life is hard, and it changes in ways we don’t want or expect. Running away isn’t the answer. We have to find the good in what we have, and we have to appreciate it. Otherwise you’re never going to be happy no matter where you are.”

Simon and Winter, who are the most developed characters, add an interesting contrast. Simon is an extremely likable character, who has compassion for others and wants to do what is right. On the other hand, Winter’s prickly personality and insecurities are more consistent with a rebellious teenager. Simon and the others stick by Winter’s side even though she is at times difficult to deal with. The friends’ interactions highlight the importance of individuality and accepting yourself. After all, “When it comes to you, the only opinion that matters is your own.”

Aimee Carter brings the complex Animalgam’s world into sharp focus as she creates well-developed characters that are unique. The action-packed sequel to Simon Thorn and the Wolf’s Den is just as amazing as the first book. Readers will enjoy the non-stop action and will root for Simon and his friends as they try to defeat an evil villain. Simon Thorn and the Viper’s Pit takes the reader on an exciting adventure that focuses on friendship, loyalty, and family. Readers will not be able to stop turning the pages of the Simon Thorn series, so make sure you have the next book in the series, Simon Thorn and the Shark’s Cave.

“Awesome people aren’t bullies. Awesome people are accepting and nice and don’t call people traitors or Mutts or act like the world should revolve around them, because it doesn’t,” Simon. –Simon Thorn and the Viper’s Pit