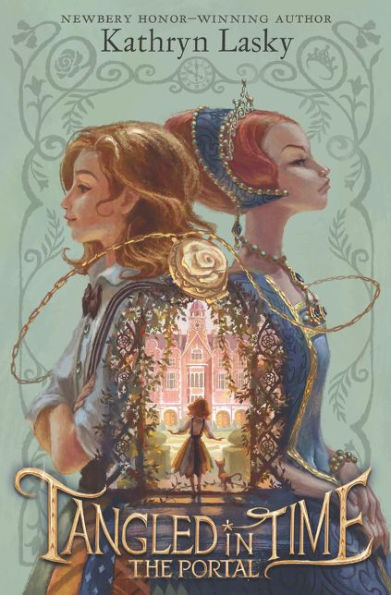 “No one pays attention to servants. They have a blind spot when it comes to us. We are like air. They just move through us, never giving us pause,” Jane the fool. –The Portal

Rose lives an ordinary life with her mother. She loves her friends and has a fashion blog, which has a lot of hits. Everything changes when Rose’s mom is killed in an auto accident. Rose is sent to live with a grandmother she barely knows. To make life worse, a group of mean girls makes fun of Rose’s fashion-forward looks. Now Rose must deal with being the target of bullying as well as trying to understand her grandmother’s dementia.

Rose finds peace in her grandmother’s greenhouse. One night, a strange glowing light appears in the greenhouse. When Rose goes to investigate, she is thrown five hundred years into the past. Rose is now the servant of Elizabeth, the daughter of King Henry VIII. When Rose finds a locket with two mysterious pictures in it, she begins to wonder about her own past. Can the locket reveal mysteries about her parents?

Rose goes back and forth between the present and the past. Although many connections are made between the two time periods, some readers may not like the jumpy nature of the story. As Rose goes into the past, the reader learns fun facts about the time period as well as gets a peek into the dynamics of the royal family. Rose’s love of fashion is integrated into the story, and Rose includes pictures of the time period’s clothing and shoes as part of her blog. In both time periods, the author’s theme is clear: all people should be treated with respect and kindness.

Readers will be able to relate to Rose, who is not portrayed as a perfect character. Rose struggles with fitting in, and even though she recognizes that people should be treated with kindness, she doesn’t always show kindness herself. However, Rose is lovable because of her curious nature and her willingness to stick up for others.

Even though The Portal doesn’t explain the magic of time travel well, readers will still find the fast-paced story enjoyable. The conclusion feels a little rushed, and not all of the pieces fit well together. Despite this, The Portal is an entertaining read that has a dash of historical facts. Younger readers who enjoy time travel stories with strong female characters may also want to read The League of Archers and Ruby Red Trilogy.

“No one pays attention to servants. They have a blind spot when it comes to us. We are like air. They just move through us, never giving us pause,” Jane the fool. –The Portal