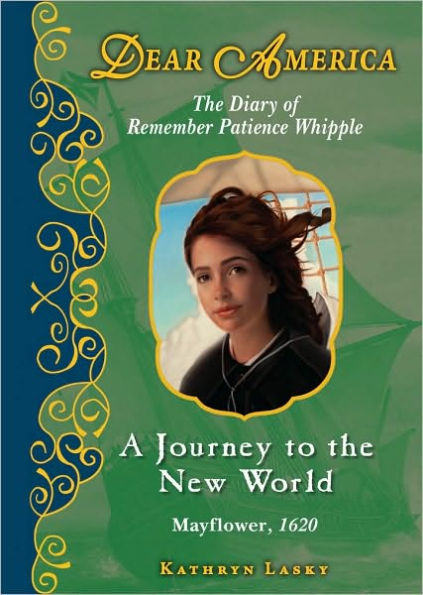 A Journey to the New World: The Diary of Remember Patience Whipple

In 1620, twelve-year-old Remember Patience Whipple and her family set off for the New World. The 65-day journey on the Mayflower is difficult and boring. Remember writes about the journey in her diary, which she calls Mim.

One hundred and two people, including 34 children, were crammed into a dark, cold cargo deck. With no privacy and no way to escape from others, there was plenty of drama. When the ship spotted land, the passengers were disappointed to discover they were in the wrong place. Despite this, the men decided to find a place to build their settlement.

Because they arrived during winter, the passengers were forced to continue living on the ship. However, Patience and the other Pilgrims were excited to begin building the settlement even though they now faced harsh weather, lack of food, and an attack by “feathered men.” To make matters worse, half of the passengers die in the first winter. Through all of this, Remember remains hopeful that life in the New World will have many opportunities.

As Remember writes a detailed chronicle of her journey, readers will get a firsthand account of a Pilgrim’s life. While much of Remember’s diary is interesting, some of the entries are redundant. When the group arrives in the New World, many people die including Remember’s mother. Soon after, the widow, Hannah Potts, begins helping Remember’s family, which is confusing for Remember.

Some of the most interesting diary entries are about the “feathered men.” Remember is fascinated by them and is excited when she finally has an opportunity to meet an Indian. Remember’s curiosity and enthusiasm are remarkable and her changing views are interesting. Throughout her story, Remember always gives thanks to God. In her last diary entry, she wrote, “I have after all learned to plant a seed in a hole and bring up corn. I have learned how to beat a stream in the moonlight till it gives forth eels for our cooking pots. I have learned many words in the strange tongue of the Wampanoag.”

Remember’s spirit is amazing, as is her willingness to try new things. However, readers who are used to stories with lots of action and adventure will find Remember’s diary difficult to finish. Remember’s diary allows readers to understand her day-to day-life. However, readers will be unable to make an emotional connection to the other passengers. And much like our own lives, Remember’s daily life lacks much excitement. A Journey to the New World would be perfect for research and for readers who are inherently interested in this time period.