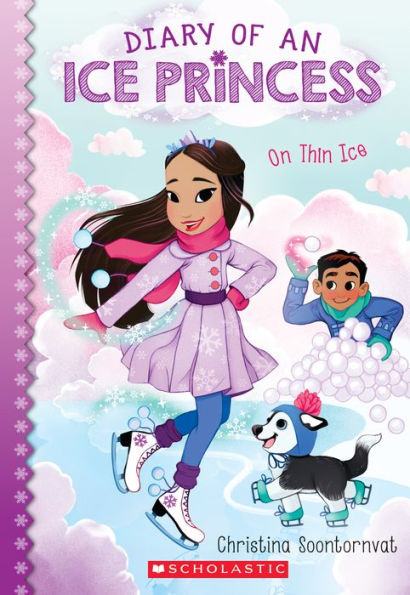 “Diary, I know this is weird, but I wish Jack was the burp-on-your-pillow sort of cousin. It turns out the perfect-in-every-way sort is even more annoying,” Lina. –On Thin Ice

Diary of an Ice Princess #3

Lina’s excited about her class field trip to the aquarium. Lina has never ridden on a yellow school bus or gone to the aquarium before. When Lina finds out that her cousin will be visiting and going to school with her, Lina’s a little bit nervous. Because of his ice magic, Jack soon becomes the most popular kid in school. Lina is jealous of Jack’s ice magic skills and she is tired of him always showing off.

At the field trip, Lina and Jack see the penguins. Each one wants to prove that they can build the best ice sculpture. But soon their magic is out of control. Although the penguins love the ice slides and the mountains of snow, the other aquarium animals are in danger. Will the two cousin’s competition turn the aquarium animals into icicles? Will they ever learn to get along?

Readers will relate to Lina’s jealousy of her cousin’s ice magic skills. Lina and Jack get along fine when they are alone, but once Jack is around people he always shows off. In the end, both of them realize that jealousy can be dangerous. Eventually, Lina learns that Jack “thought that if everyone saw I was so good at winter magic, they’d ask me to come back and teach you again.” Even though their ice magic gets them into some cold situations, in the end, both Jack and Lina learn the importance of learning from each other.

Illustrated with cute black, white, and purple illustrations, On Thin Ice is perfect for any reader who dreams of being a princess. Even though Lina tries hard to be nice, she still makes mistakes.  On Thin Ice is told in a diary format using simple vocabulary. The paragraphs contain three or fewer sentences and have a variety of graphic elements to break the text into small portions. The easy-to-read story has relatable conflicts and highlights the importance of communication.

The cute illustrations include pictures of all of the characters and Lina’s activities. The bright purple-and-black illustrations appear on almost every page, and they include illustrations of binder paper with a list that helps readers understand the plot. For example, Lina makes a list of “things I’d noticed earlier this week.” In addition to the illustration, Lina’s grandfather’s words are in big, bold text, which will help the reader distinguish the speaker.

Readers who like friendship, magic, and animals will enjoy On Thin Ice. The story teaches about animals. The end of the book explains how blubber works and gives directions for an experiment. Parents will like the encouraging characters and the positive life lessons the story teaches. Scenes of a perfect pink palace in the sky are mixed with a regular school and kind characters to create a story that will please both parents and younger readers.

“Diary, I know this is weird, but I wish Jack was the burp-on-your-pillow sort of cousin. It turns out the perfect-in-every-way sort is even more annoying,” Lina. –On Thin Ice