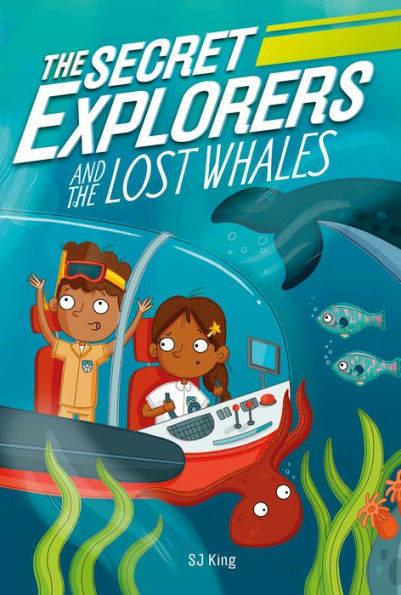 Other books by SJ King

“Where do you think the word ‘astronaut’ comes from?” Roshni said with a grin. “Astron means star, and nautes means sailor. Astronauts are literally star sailors!” –The Secret Explorers and the Lost Whales     Secret Explorers #1

Meet the Secret Explorers! This group of brilliant kids comes together from all four corners of the globe to fix problems, solve mysteries, and gather knowledge from all over the planet – and beyond. Whenever their help is needed, a special sign will appear on a door. They step through to the Exploration Station and receive their mission…

In The Lost Whales, marine life expert Connor needs to use his underwater expertise to save a pod of humpback whales who have lost their way. Along with space expert Roshni, Connor sets out in a submarine to search for a way to steer the whales back on track. However, they encounter unexpected problems along the way, including lost baby whales and a fleet of boats. Will the Secret Explorers manage to succeed in their mission?

Even though The Secret Explorers are a large, diverse group of children, The Lost Whales focuses on Connor and Roshni. Even though the children are smart, they are not perfect, which makes them more relatable. Some humorous scenes are mixed in with the facts. For example, in order to get a pod of whales to swim in another direction, Connor raps. Roshni teases him by saying, “That has to be the worse rapping that I’ve heard in my life. I think I cringed my way into a parallel universe.”

The book is jam-packed with whale facts. While a lot of the information is integrated into the story’s plot, at times the lessons seem forced. For example, Connor and Roshni find red sea algae, which is bad for ocean animals. Connor thinks, “There’s no sense in blaming the algae though. They fed on farm fertilizer that had been washed out to sea and grew so fast because climate change had warmed the oceans.” Despite this, readers will enjoy learning about whales and other ocean creatures.

During the adventure, Connor and Roshni put on scuba gear and swim toward a boat. When Connor and Roshni approach the boat, they ask permission to board, and a young boy gives them permission even though he is on the boat deck alone. While this part of the plot is essential to solving a problem, parents may want to discuss why that could have been a dangerous situation.

The Lost Whales has large black and white illustrations that will help break up the text and help readers understand the plot. Characters’ thoughts are easy to distinguish because they are in bold text. While younger readers may struggle with some of the difficult vocabulary and the length of the book, the book’s educational value makes it worth parents’ time to read the book aloud to their children. The book ends with 6 pages of additional facts, a glossary, and a quiz.

The Lost Whales has a blend of action, problem-solving, and ocean life facts that will make parents and young readers happy. The books do not need to be read in order because each book describes a new adventure. Readers will be excited to read the rest of the books in the series because they cover a wide variety of topics, including archaeology, dinosaurs, space, and other high-interest topics.

Other books by SJ King

“Where do you think the word ‘astronaut’ comes from?” Roshni said with a grin. “Astron means star, and nautes means sailor. Astronauts are literally star sailors!” –The Secret Explorers and the Lost Whales     Secret Explorers #1