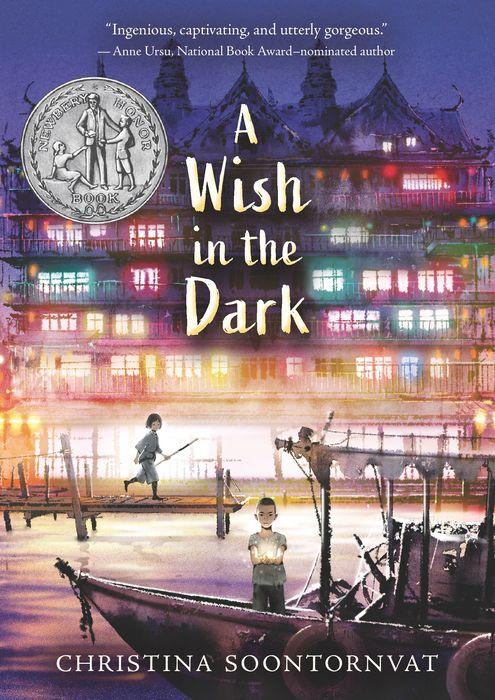 “Desperate people deserve our compassion, not our judgment,” Father Cham. –A Wish in the Dark

A Wish in the Dark

All light in Chattana is created by one man — the Governor, who appeared after the Great Fire to bring peace and order to the city. For Pong, who was born in Namwon Prison, the magical lights represent freedom, and he dreams of the day he will be able to walk among them. But when Pong escapes from prison, he realizes that the world outside is no fairer than the one behind bars. The wealthy dine and dance under bright orb light, while the poor toil away in darkness. Worst of all, Pong’s prison tattoo marks him as a fugitive who can never be truly free.

Nok, the prison warden’s perfect daughter, is bent on tracking Pong down and restoring her family’s good name. But as Nok hunts Pong through the alleys and canals of Chattana, she uncovers secrets that make her question the truths she has always held dear. Set in a Thai-inspired fantasy world, Christina Soontornvat’s twist on Victor Hugo’s Les Misérables is a dazzling, fast-paced adventure that explores the difference between law and justice — and asks whether one child can shine a light in the dark.

Beautiful imagery and compelling characters bring the world of Chattana into clear focus. While the story focuses on Pong, the supporting characters add interest and depth. Pong, who was born and raised in prison, believes that his only chance of living a happy life is to flee Chattana. With the help of Father Cham, Pong realizes that he cannot run from his problems. Father Cham explains, “You can’t run away from darkness. It’s everywhere. The only way to see through it is to shine a light.” Because of Father Cham’s wise words, Pong has the strength to stand up for justice and change his world for the better.

A Wish in the Dark shines a light on social issues such as protest, privilege, and justice. However, the book does not preach a particular doctrine. Instead, Pong’s experiences lead him to understand that one mistake or misfortune does not define a person. For example, Pong sees firsthand how people who have been in prison face discrimination. Once they are released, they find it difficult to find jobs and provide for their families. Because Father Cham lives a life dedicated to helping the poor, Pong learns compassion for those who are poor and downtrodden. Father Cham teaches that “desperate people deserve our compassion, not our judgment.”

As a Newbery Honor Book, A Wish in the Dark will leave readers thinking about many of society’s problems. While the story shows the glaring disparities between the wealthy and the poor, it does not give unrealistic solutions. Instead, readers see how “wealth can be as much a curse as a blessing and no guarantee of happiness.” The conclusion doesn’t end with a perfect happy-ever-after, but instead shows that there is hope for the people of Chattana. The story also leaves readers with this question: “Which is better: being safe or having freedom?”

“Desperate people deserve our compassion, not our judgment,” Father Cham. –A Wish in the Dark