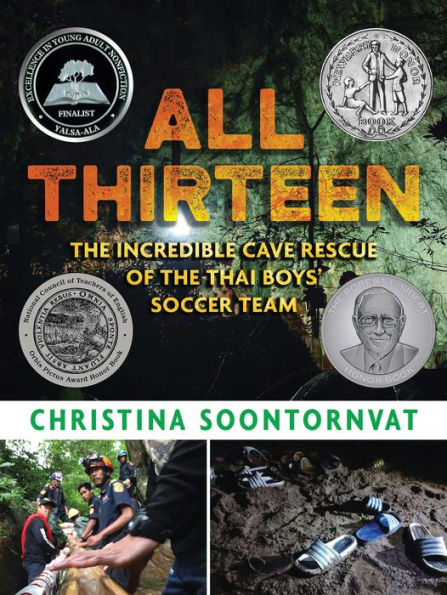 “I told myself that I would go into the cave, and if the boys didn’t come out I wouldn’t come out either. I would stay there as long as it took,” Navy Seal. —All Thirteen

All Thirteen: The Incredible Cave Rescue of the Thai Boys’ Soccer Team

The Wild Boars soccer team is made up of explorers. The 12 members ventured deep into the caves at Tham Luang, further than even some seasoned cavers. They were bold with their exploring, looked out for one another, and worked well as a team. However, their adventurous spirit was met with bad luck when the team and their assistant coach became trapped in the cave. With the wet season approaching in Thailand, the mountain where the cave was located was saturated with water and when it started to rain, the caverns began to flood.

When the team went missing, rescuers and problem-solvers were called to action to rescue the team. In order to save the soccer team, rescuers would need a well-thought-out, coordinated plan. It was going to be a huge undertaking. The book takes the reader through the timeline of the rescue mission and dives into broader topics that color the event. Soontornvat highlights the importance of STEM in the mission and goes into the scientific details about the cave and how the water and sediment affected the mission. At the same time, there are subsections in the book that go into the historical and cultural context of the local community.

Buddhism and meditation is an important piece of this nonfiction story. Part of what made the mission successful was that the soccer team did not panic and they were able to focus their energy with meditation. “When thoughts of hunger, pain or shame come in through one window, you can notice them, and then let them float right out the other window, keeping the room of your mind clear from all that clutter.” The Wild Boars were trapped in the cave for 18 days and they needed to look within to ease their pain. The subsections on Buddhism and meditation are a great introduction to Eastern religion and meditation practices. Without overwhelming the reader with specifics, the book takes these concepts and displays them in a way that is relatable to a younger audience.

Soontornvat also touches on geopolitical issues that are present in Thailand, such as immigration and religious persecution in neighboring countries. While the story is focused on the rescue mission, Soontornvat uses the experiences of the Wild Boars’ assistant coach, Coach Ek, to understand asylum-seekers. Coach Ek was forced to migrate to Thailand from Myanmar to escape the armed conflict. Migrant children face tough odds as they often do not have the necessary support systems to help them. Coach Ek considers himself lucky to have found the Wild Boars because he was able to find community and serve as a mentor to the soccer players.

The photographs in the book bring humanity and a sense of urgency to the story, as well as highlight the scale of the rescue mission. Many of the pictures were taken during the mission. The massive undertaking of bringing the Wild Boars to safety is captured with photographs of heavy machinery, the elaborate sump systems, and camo-wearing Navy SEALs. The book has a cinematic feel to it and the fast-paced life-or-death story keeps the reader turning pages. With loads of first-hand accounts, artifacts, and photos, the reader will feel immersed in the rescue mission.

One of the underlying themes of the book is that collaboration and teamwork can accomplish amazing things. There is no shortage of heroism in this story as people from all over the globe pitch in to save the boys. Donations are made, scuba experts consulted, farmers help with the sump system and the soccer team supports each other during the trying times. For the team, their support for each other was paralleled through the lens of soccer, helping to make it relatable to young readers. “Through their time on the soccer field, they know what it feels like to work as a team to tackle something that seems impossible.” Despite the danger of being trapped and impossible odds, through collaboration and sheer willpower, the boys are brought to safety.

“I told myself that I would go into the cave, and if the boys didn’t come out I wouldn’t come out either. I would stay there as long as it took,” Navy Seal. —All Thirteen