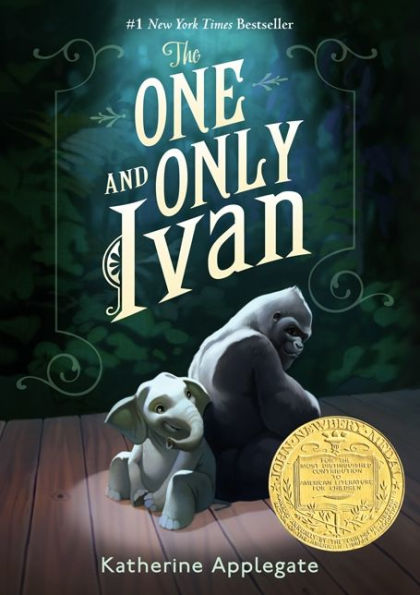 The One and Only Ivan

Ivan once lived in a jungle, now he lives in a small domain at Exit 8 Big Top Mall and Video Arcade. He spends his time watching the people who come by and television shows. Ivan doesn’t think about his life in the jungle, instead, he is content to talk to his friends Stella, an elephant, and Bob, a dog.

Ivan also likes to draw pictures. His favorite thing to draw is a banana. No one seems to understand his art, except for Julia, a little girl who sits outside of his domain in the evenings when her father works cleaning the mall.

Ivan thinks he is content with his life until he meets Ruby, a baby elephant who was taken from her family. Ruby makes Ivan remember what his life was like when he lived in the jungle and what it means to be a silverback—a protector. With the help of his artwork, Ivan hopes to help Ruby escape living in her domain at Exit 8 Big Top Mall and Video Arcade.

Ivan’s first-person narrative is a touching story about Ivan’s friendships and his love of art. Through his eyes, the reader is introduced to how captive animals are treated. Although the story is told with humor, the topic may be upsetting for more sensitive readers. In the end, Ivan and his friends finally have a happy home that will make the reader smile.