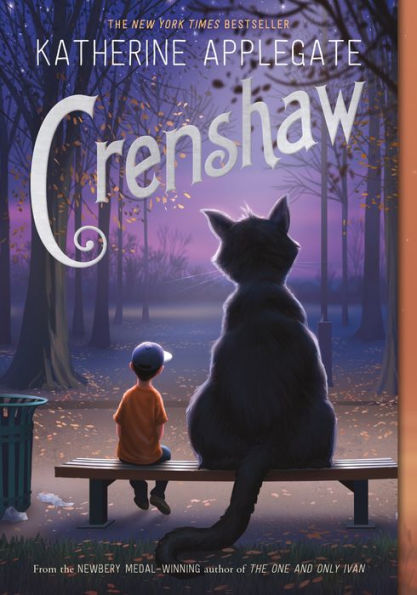 Jackson’s world is turned upside down when his parents move the family into a mini-van. His parents, his little sister, and their dog don’t have anywhere to live and sometimes they don’t have enough to eat.  Jackson tries not to complain. He tries to keep his confusion and fear to himself.

Then Crenshaw appears. He’s big. He’s outspoken. He’s an imaginary cat. Crenshaw is trying to help Jackson, but Jackson just wants him to go away.

Crenshaw is told from the point of view of Jackson, which allows younger readers to get a glimpse into the world of being homeless without going into too much detail. Through the story, the reader learns that homelessness can happen to anyone, even when they are trying their best.

Jackson’s life story has many lessons, including the importance of honesty. Jackson steals food for his sister because she was hungry. However the theft is not glamorized, and when his sister throws up on Jackson’s book, he figures that it was his punishment.

With the help of his imaginary friend Crenshaw, Jackson finds the courage to tell his friend and his parents the truth about his feelings, which is the most important lesson of all.

Crenshaw uses humor, a gigantic cat, and a realistic situation to teach about the struggles of financial difficulties and the importance of friendship. The author uses easy to understand language and dialogue to bring the characters to life.