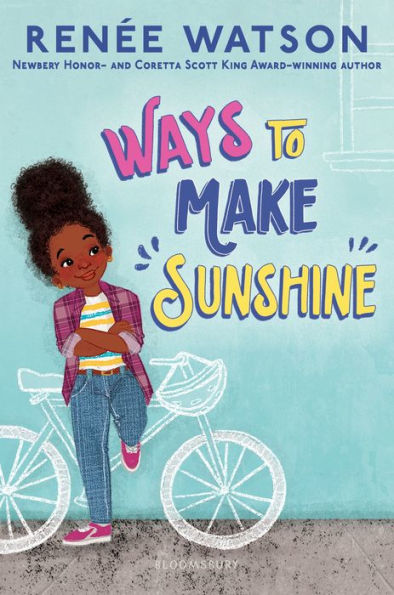 Other books by Renée Watson

“Here’s the thing about ice cream. No matter how sweet it is, no matter if it’s given to you when you aren’t supposed to have it, no matter if you’re told you can come back for seconds—it doesn’t take the sadness away,” Ryan. –Ways to Make Sunshine

Ryan’s name means “king,” and she is determined to grow into the name her parents gave her. She is all about trying to see the best in people, to be a good daughter, sister, and friend. But Ryan has a lot on her mind.

For instance, Dad finally has a new job, though money is still tight. That means moving into a new house, and Dad working the night shift. Also, with the fourth-grade talent show coming up, Ryan wonders what talent she can perform on stage in front of everyone without freezing. As more changes and challenges come her way, Ryan always finds a way forward and shows that she is a girl who knows how to glow.

Ryan deals with real issues, including arguing with her brother and having stage fright. The story hits on several difficult topics such as family financial difficulties and having a best friend move away. Despite this, none of the topics are well developed. However, Ryan does tackle each obstacle and tries to see the bright side of things.

Most of the conflict comes from Ryan arguing with her brother as well as some friendship issues. While the conflicts are realistic, none of them are very exciting. The story portrays Ryan’s family in a positive manner and her parents always encourage her to do her best. Despite this, Ryan still has stage fright and is unable to say a poem during church. Ryan’s mother doesn’t reprimand her but instead encourages Ryan to try again. In the end, Ryan is able to gain confidence and overcome her stage fright.

Ways To Make Sunshine shows how Ryan uses the power of positive thinking to overcome many obstacles. Another positive lesson the book teaches, is that beauty doesn’t come from looks. Ryan’s grandmother says, “Your kindness makes you beautiful and the way you’re always willing to offer help makes you beautiful.” Another positive aspect of the story is the cute, black-and-white illustrations that appear every 4 to 11 pages.

Ryan is a relatable African-American character. However, the story is realistic fiction and does not have much action or adventure. If you like cooking disasters, sibling squabbles, and friendship drama, then Ways To Make Sunshine will entertain you. On the other hand, if you’re looking for a book with similar themes but more action, take a look at The Friendship War by Andrew Clements or Caterpillar Summer by Gillian McDunn.

Other books by Renée Watson

“Here’s the thing about ice cream. No matter how sweet it is, no matter if it’s given to you when you aren’t supposed to have it, no matter if you’re told you can come back for seconds—it doesn’t take the sadness away,” Ryan. –Ways to Make Sunshine