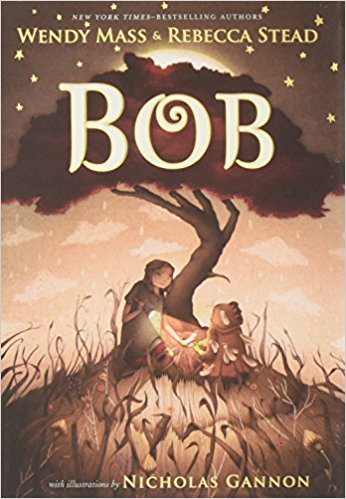 Five years ago, Livy told Bob to hide in a closet. Since then, he’s built a Lego pirate ship sixty-three times. He’s played chess with a Lego pirate monkey. He began reading the dictionary. And he’s wondered why Livy hasn’t come back.

It’s been five years since Livy visited her grandmother in Australia. Once she’s back, she knows she’s forgotten something very important. She’s forgotten all about Bob.

Bob, a short greenish creature, hasn’t forgotten about Livy, but he has forgotten who he is and where he came from. Five years ago, Livy promised to help him find his home. Now that Livy is back, they work to solve the mystery of where Bob belongs.

Each chapter switches between Livy’s point of view and Bob’s point of view. Hearing the different perspectives of each character adds interest and allows the reader to peek into each character’s world. Younger readers will relate to Livy, who is afraid to stay the night at her friends’ houses and struggles between growing up and remaining a child. Bob adds an interesting perspective showing how Livy has changed since they parted five years ago. In the end, Bob realizes that “Livy’s not just Old Livy or New Livy, she’s every age she’s ever been, and sometimes they get jumbled but they are all there.”

The simple writing style and beautiful pictures will engage even the most reluctant readers. Bob has spent much of his time reading the dictionary and uses his knowledge to explain the meaning of words in a fun way that is completely integrated into the story, so readers will learn new words without feeling like they are sitting through a vocabulary lesson. The story contains short paragraphs, lists, and dialogue that break up the test and keep younger readers interested.

The mystery of where Bob came from and what he is adds interest. The friendship between Bob and Livy will touch reader’s hearts. Bob and Livy are well developed; however, the other characters lack personality and added little to the plot. The ending is a surprise and wraps everything up nicely. Not only does Bob show the value of friendship, but he also realizes that “All the things I choose to put in my head are what make me, me. I plan to choose wisely.”