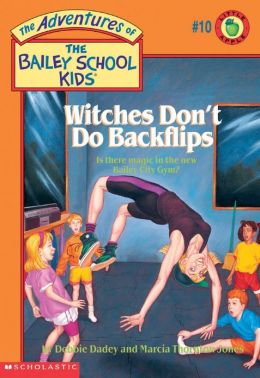 The Adventures of the Bailey School Kids

Eddie and Melody are determined to prove that Miss Brewbaker is a witch. Melody says, “It all adds up: a moving broom, strange rhymes that come true, and flips that look like flying.” Is Miss Brewbaker really a witch? And if she is, how will they find a way to reverse the spell and turn Prince Diamond back into a dog?

Young readers will enjoy trying to piece together the clues to prove Miss Brewbaker is really a witch. Miss Brewbaker looks like a stereotypical witch, with a big nose and a wart. However, she is nice to the kids…that is, until Prince Diamond appears. Miss Brewbaker and her black cat both want to avoid dogs. This leads to some silly speculating among the four friends. None of the clues prove that Miss Brewbaker is a witch, but the kids are still convinced that she has witchy powers.

The kids go to the library to research witches. Then during gymnastics, the kids keep finishing Miss Brewbaker’s rhymes because “the library book said that finishing a rhyme takes away the spell’s power.” In addition, the kids distract Miss Brewbaker so Eddie can look for her spellbook. Afterward, Eddie says, “I found the cookbook, or rhyme book, or spellbook, or whatever you want to call it. Then I said each one backwards. . . I bet it broke every one of Miss Brewbaker’s spells.”

Black cats, spells, and a missing dog combine to make a fast-paced story that readers will enjoy. Even though the story focuses on a witch, there are no spooky scenes. Witches Don’t Do Backflips is a fun story that will appeal to many readers and get them in the mood for some fall fun.