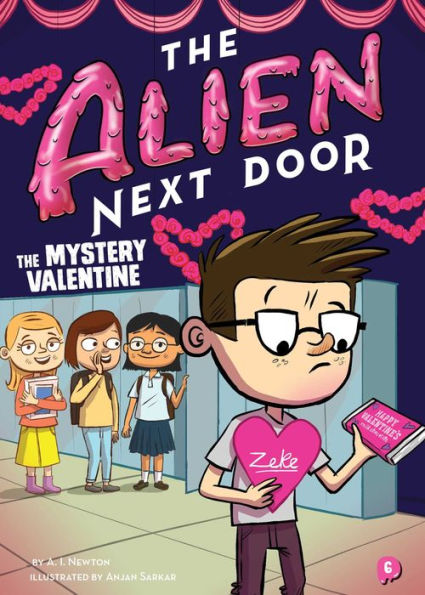 “Sometimes when you have a problem, the solution comes along when you least expect it,” said Roxy. –The Mystery Valentine

The Alien Next Door #6

Zeke doesn’t understand the Earth tradition of Valentine’s Day. Harris tries to explain why people give candy and cards on Valentine’s Day, but Zeke is still confused. When Zeke gets an anonymous valentine, Harris wants to help him discover who sent it. In order to decide who gave Zeke the valentine, he decides to give some of the girls in his class a gift. He gives gifts that the girls on his home planet would love, but the girls on Earth don’t like the same things. How can Zeke find his secret admirer? Will he come up with a gift that an Earth girl will like?

Earth children will giggle as Zeke tries to find the perfect valentine gift. Even though Zeke wants to show his appreciation, he doesn’t understand what Earth girls like. The story has many silly situations such as when Zeke presents a bucket of worms to a girl, who isn’t happy about the “gross” gift. The fun black and white illustrations show the characters’ reactions to Zeke’s gifts as well as his confused facial expressions.

The sixth installment of The Alien Next Door series takes a humorous look at the traditions of Valentine’s Day. Readers can enjoy the story even if they have not read any other books in the series. Although the story focuses on Zeke, Harris makes an appearance and helps Zeke understand the differences between how humans see things, like mice, in comparison to how Zeke sees things. Readers will learn the importance of thinking about other people’s perspectives.

The Mystery Valentine has the same format as other books in the series—easy vocabulary, short sentences, and dialogue. Readers who are transitioning to chapter books will enjoy the illustrations and the easy-to-read format. The Mystery Valentine is a silly story that will leave readers wanting a chocolate bar and wanting to read more about Zeke’s adventures on Earth.

“Sometimes when you have a problem, the solution comes along when you least expect it,” said Roxy. –The Mystery Valentine