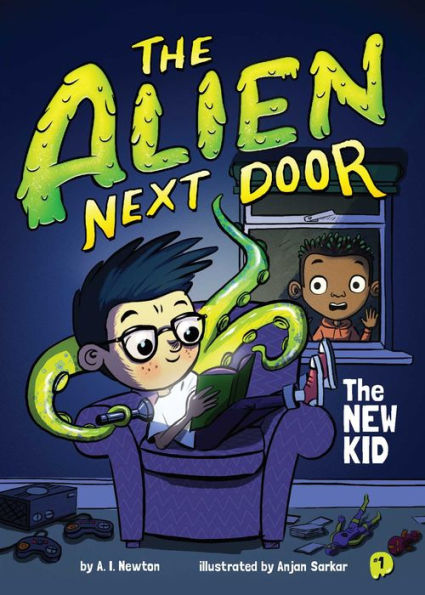 “Just because he’s different from you doesn’t mean he isn’t nice,” Roxy.  —The New Kid

The Alien Next Door #1

There’s something strange about the new kid in school. Zeke eats strange food, acts strange, and uses strange words when he talks. Harris thinks Zeke is an alien (and he’s right), but no one believes him. Not even his best friend Roxy. Harris is determined to prove that Zeke is an alien. Will Zeke’s strange behavior give him away or will he be able to keep his secret?

Zeke’s strange behavior will engage beginning readers as well as teach an endearing lesson about friendship and being kind to others. The story is humorous not only because of Zeke’s odd behavior but also because no one believes Harris when he claims that Zeke is an alien. Harris looks at comic books and watches a movie about aliens, and Zeke acts just like the characters in the book/movie. The black-and-white illustrations show Zeke and fictional aliens doing the same things, which adds to the humor.

Besides the fun topic, The Alien Next Door has a variety of other elements that are perfect for students who are transitioning to chapter books. Each page contains illustrations that help break up the text. The illustrations will also help readers understand the wide range of emotions each character feels. The large font, simple vocabulary, short chapters, and dialogue make The Alien Next Door a fun book to add to a beginning reader’s book list.

“Just because he’s different from you doesn’t mean he isn’t nice,” Roxy.  —The New Kid