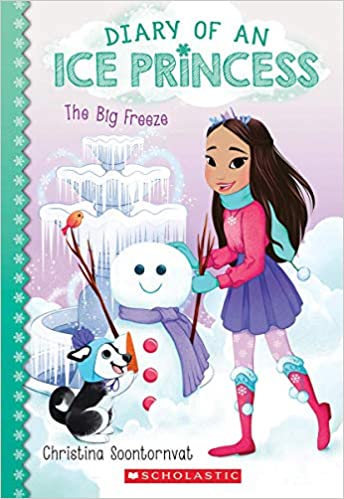 “Diary, I have heard of ‘writer’s block,’ but is there such a thing as ‘artist block’?” Lina. –The Big Freeze

Diary of an Ice Princess #4

The time has come for Princess Lina to choose her magical weather specialty. Her cousin, Jack Frost, makes amazing snowflakes. Her Uncle Lee forms ice caves in glaciers. Her Great-Aunt Sunder creates winter storms on polar seas. Everyone has chosen something so impressive. Lina’s not sure what she’s going to do—but she’s determined to make her mark in a big way!

To complicate matters, Lina’s teacher has assigned an art project. Lina is disappointed that she can’t use science because she isn’t artistic. Everything Lina tries turns out to be a big mess. After several failed attempts to create art, Lina uses magic to make her project, but she wonders if that is cheating. Lina thinks, “One of Ms. Collier’s rules was that we were supposed to do our projects without any help. But she didn’t say anything about using magic, right?”

The Big Freeze is told from Lina’s point of view, which helps readers understand her conflicts. Readers will relate to Lina’s difficulty at school and her desire to make her family proud. Lina writes in her diary often, which allows the readers to understand her thoughts and feelings. Lina’s best friend, Claudie, also tries to help Lina by giving advice. The two girls’ friendship is sweet and Claudie’s words are always encouraging and positive.

One of the reasons Lina has difficulty completing her project is because she wants it to be perfect. In the end, instead of copying someone else’s art form or turning in a project that was made by magic, Lina writes a poem and turns it in late. Lina learns that “there’s no such thing as a perfect piece of art” and that she “needed to cut [herself] some slack.”

Readers will be drawn into the book because of the cute illustrations that appear in black, white, and light green. The illustrations appear on almost every page and the pictures help readers understand the plot because they show Lina’s activities. The Big Freeze uses simple vocabulary, plus several pages contain a list. The paragraphs contain three or fewer sentences and have a variety of graphic elements to break the text into small portions. The easy-to-read story has relatable conflicts and interesting characters. Lina’s grandfather is a major character, and he has a “big, booming voice [that] can get a little intense.” To emphasize how loud Lina’s grandfather is, his words appear in large green font and all capitals.

Readers who love princesses and magic will find The Big Freeze to be an entertaining book. The end of the book gives directions on how to make a snowflake that has “the power of patterns.” Both parents and children will be pleased with the kind and encouraging characters who don’t expect each other to be perfect. For more magical reading that has kind characters check out the Candy Fairies Series by Helen Perelman and the Zoey and Sassafras Series by Asia Citro.

“Diary, I have heard of ‘writer’s block,’ but is there such a thing as ‘artist block’?” Lina. –The Big Freeze