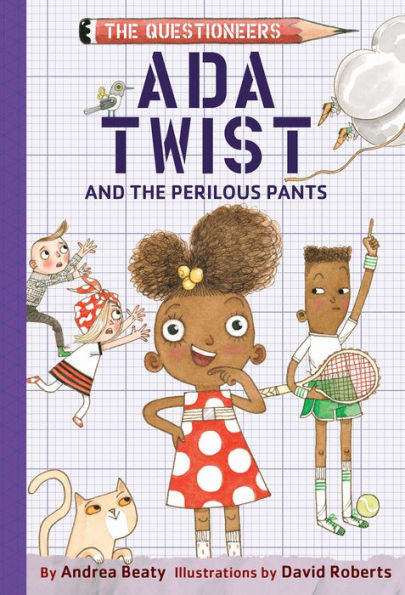 “She loved having a question to explore. It was a mystery! A riddle! A puzzle! A quest!” Ada. –Ada Twist and the Perilous Pants

Ada Twist and the Perilous Pants

Ada Twist loves questions. One morning, she learns that hot coffee smells stronger than cold coffee. In a quest to find out why, she heads to the backyard to experiment with smells. Ada takes her brother’s shoes to use in her experiment. She doesn’t understand why her brother Arthur gest so cranky when he discovers his shoes are part of her experiment. As Ada is working on her theories, Uncle Ned flies by.

Uncle Ned got carried away in his helium pants. In order to help Uncle Ned, Ada must first answer a lot of questions. With help from fellow Questioneers Iggy Peck and Rosie Revere, her brother Arthur, and some new friends, Ada Twist is ready to save the day!

Ada loves to discover the answer to the myriad of questions that she has. She collects data, keeps a notebook, and brainstorms solutions with her friends. Ada uses all five senses to “gather data.” Even though the story explains science in kid-friendly terms, the number of topics might overwhelm some readers. The story explores smells, air currents, how weather vanes work, buoyance forces, and types of birds. In addition, the story explains what air is, what gases are, and what smells are.

Ada’s scientific notebook contains purple and brown illustrations that help readers understand her science experiments. In addition to Ada’s notebook, the author also includes pictures of the characters. Readers will giggle as Uncle Ned’s helium pants take him on a crazy journey. The illustrations in The Questioneers series are similar to the author’s picture books.

The text contains short, simple sentences with plenty of dialogue and onomatopoeias. Although the majority of the text is easy to read, some of the vocabulary is difficult, such as perilous, hazardous, buoyancy, overwhelmed, and reeking. Unlike the first book in the series, Ada Twist and the Perilous Pants tries too hard to incorporate science lessons. The plot is at times confusing because it jumps from topic to topic while including many of the characters from the previous books.

Readers who are just transitioning to chapter books will have difficulty with the advanced vocabulary and the confusing plot. However, readers interested in science will be completely engaged in the story. Even though Ada’s excitement takes over, her family is patient and encouraging. The story often points out the importance of asking permission before using someone else’s belongings. The end of the book has information about becoming a citizen scientist, a list of information about birds, and a poem about gas. Readers who enjoy The Questioneers series will also want to read the Ellie, Engineer series. Science lovers who aren’t ready for The Questioneers series may want to try The Data Set.

“She loved having a question to explore. It was a mystery! A riddle! A puzzle! A quest!” Ada. –Ada Twist and the Perilous Pants