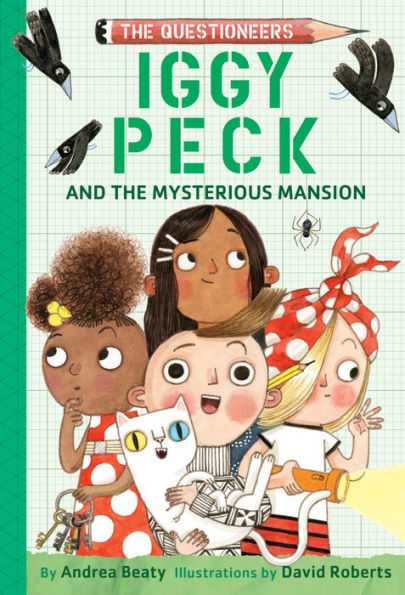 “Architects and their cats are brave,” Iggy whispered. –Iggy Peck and the Mysterious Mansion

Iggy Peck and the Mysterious Mansion

Iggy Peck is an architect at his very core: when he’s not making houses out of food, his head is up in the clouds, dreaming of design. So he’s totally blown away when Ada Twist’s Aunt Bernice inherits an old house from ice-cream mogul Herbert Sherbert that is filled with countless rooms from all his favorite architectural periods. But something’s not quite right . . .

Everyone says the house is haunted, and it seems that a number of priceless antiques—which were supposed to help Aunt Bernice pay for the house’s upkeep—have gone missing. If they can’t find those antiques, Aunt Bernice might lose the house forever. It will take all of Iggy’s knowledge of architecture and the help of the other Questioneers—Rosie Revere, Ada Twist, and Sofia Valdez—to solve the mystery and find the treasure!

Iggy Peck and the Mysterious Mansion builds suspense because it has just the right amount of spooky, scary, and strange events. All of the events are eventually solved in a logical way. Iggy and his friends do some sleuthing, but they also research the Mysterious Mansion’s history and Iggy uses his knowledge of architecture to help solve the mystery.

The majority of the story focuses on the Mysterious Mansion’s history. Iggy discovers that two people who lived in the mansion died from the Spanish Flu. “People can still die from the flu, but it’s not as common because scientists invented new medicines and vaccines. People used to die of all kinds of diseases like measles and flu. Vaccines changed that.”

In addition, the spooky story also has humor. For instance, when Mrs. Bernice Twist inherits the mansion, the letter reads, “The Law Offices of Yabba, Dabba & Dew are not responsible for the actions of ghosts or anything that causes shivers, nightmares, heebie-jeebies, or worse. Especially worse.”

Most of the pages have large black, white, and green illustrations that will help readers envision the characters as well as understand the story’s plot. Other illustrations show drawings from Iggy’s notebook. However, younger readers may struggle with the story’s advanced vocabulary and the architectural lingo. However, the story’s use of imagery, onomatopoeia, and alliteration make Iggy Peck and the Mysterious Mansion a fun story to read aloud. The story ends with information about art nouveau and art deco, information about “Weird, Wonderful, and Wonderfully Weird Cats,” and a recipe to make ice cream.

Readers familiar with The Questioneers Series will enjoy seeing the same cast of characters. Iggy and his friends are curious, resourceful, and able to think outside the box. Unfortunately, the conclusion has several events that are unbelievable. Despite this, readers will enjoy the mystery, the friendship, and the illustrations.  If you’re looking for another series that has smart, curious characters, check out the Ellie Engineer Series by Jackson Pearce and the Jada Jones Series by Kelly Starling Lyons.

“Architects and their cats are brave,” Iggy whispered. –Iggy Peck and the Mysterious Mansion