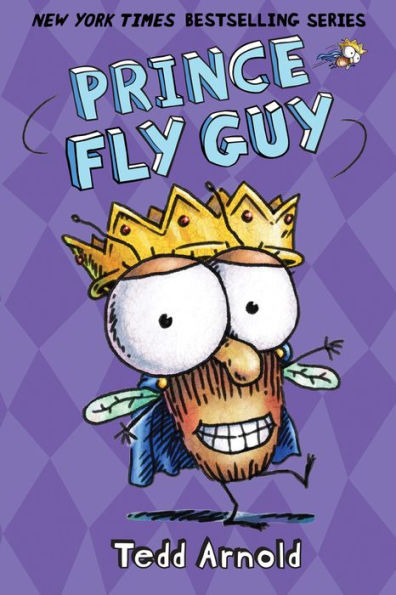 Other books by Tedd Arnold

Buzz has a hard homework assignment. He has to write a fairy tale. With Fly Guy’s help, Buzz brainstorms story ideas. Fly Guy puts himself into Buzz’s story suggestions—an ugly troll, a smelly pig herder. Fly Guy decides he wants to be a handsome prince. Prince Fly Guy flies to a dark castle, fends off a giant, and rescues a beautiful princess.

The fiftieth installment of the Fly Guy series does not have to be read in order because the plot does not build on previous books. Like the previous books, the story uses slapstick comedy and humorous full-colored illustrations. Much of the humor comes from the illustrations that show Fly Guy as different fairy tale characters. At the end of the story, Prince Fly Guy lives happily ever after.

Prince Fly Guy introduces the process of brainstorming ideas for a story. Throughout the story, Buzz and Fly Guy discuss different story possibilities. For every story possibility, Fly Guy imagines himself as the character going through the scenario. Readers will giggle at the illustrations that show Fly Guy as a fairy tale character who runs from a giant, kisses a frog, and eats cold porridge. Although the story is not unique, younger readers will still enjoy the story, and the conclusion is sure to please.

Designed for younger readers, each page contains large illustrations that use exaggerated facial features to help readers read the character’s emotions. The story will give emerging readers confidence as they move from picture books to chapter books. Prince Fly Guy has three chapters, and most pages have only one sentence. The story’s short sentences, simple vocabulary, and pattern of wording make Prince Fly Guy a good choice for younger readers.

Prince Fly Guy uses the same format as the others stories in the series. Although the story does not have a lesson, the story shows how fun the creative process of writing can be. Prince Fly Guy is an entertaining story that may just lead readers to pick up a pen and try to write their own fairy tale.

Other books by Tedd Arnold