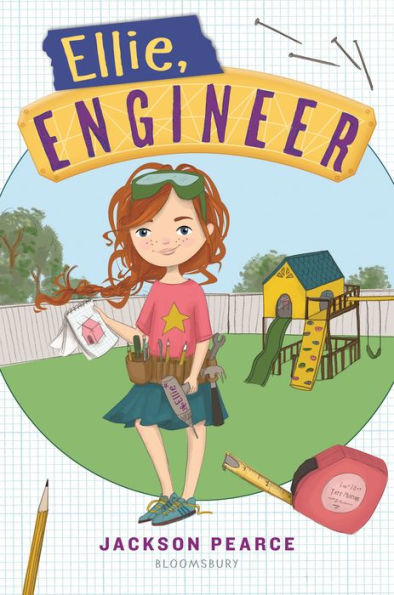 Other books by Jackson Pearce

Ellie is an engineer who makes things in her backyard workshop. Every year, Ellie makes her best friend, Kit, a birthday present. This year, Ellie isn’t sure what to make Kit for her birthday. When the girls overhear Kit’s mom talking about getting Kit a dog for her birthday, Ellie knows just what to do.

Ellie decides to build the best doghouse ever. When one of the “jerk boys” from the neighborhood offers to help Ellie build the doghouse, Ellie is excited to show him about engineering. But their plans for the doghouse get so elaborate that Ellie must ask for help from a group of girls. Because Ellie knows the two groups don’t get along, Ellie hides the fact that both groups are working on the doghouse. But her secret backfires and soon everyone is mad at Ellie, including Kit. Will Ellie be able to figure out a way to get herself out of the doghouse?

Ellie, Engineer shows that girls can be smart and creative. The story contains fun illustrations of Ellie’s sketches and has a how-to guide to tools. As Ellie works with one of the boys from the neighborhood, she realizes that her perception of him was not correct. In the end, the message is clear, “There’s no such thing as Girl Stuff or Boy Stuff. There’s only Ellie Stuff and Not-Ellie Stuff.” Ellie, Engineer is a fun story about friendship and has the added benefit of teaching new vocabulary.

The story’s plot is easy to understand and would be engaging for early elementary readers.  Although Ellie, Engineer’s vocabulary isn’t difficult, the sentence structure is complex, which may make reading difficult for newly independent readers. However, the book would be an excellent choice for more advanced readers or to read aloud with a parent.

Other books by Jackson Pearce