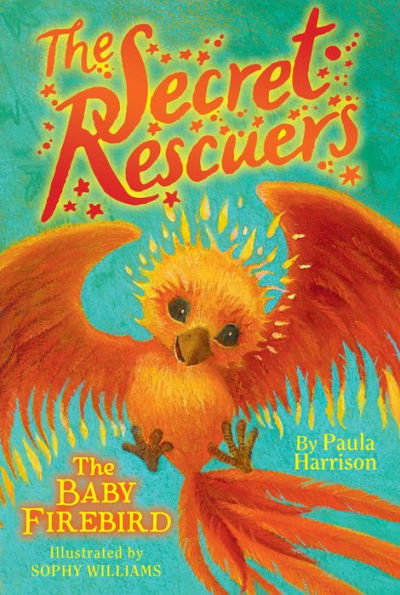 “Maybe being ignored by a dragon is a good thing!” Lucas. –The Baby Firebird

Talia lives in a tropical rain forest that is home to a flock of magical firebirds. She meets a baby firebird, Riki. The firebird is curious about the human world. As Riki explores Talia’s house, Lord Fortescue appears. He’s determined to imprison all of the firebirds. When Lord Fortescue finds out about the Cave of Wonders, he’s convinced he can capture the birds and find treasure. Riki, Talia, and her friend Lucas go into the rainforest so they can warn the firebirds to hide.

The firebirds are able to hide from Lord Fortescue, but the evil man and his soldiers put huge boulders in front of the Cave of Wonders. Without the heat from the magical waters, the firebirds become weak. The stones are too large for Talia and Lucas to move. Even though it may be dangerous, the two friends go to wake up a sleeping dragon, who reluctantly agrees to help the firebirds.

The Baby Firebird quickly draws readers into the story and keeps them in suspense until the very end. Even though Lord Fortescue and his soldiers are dangerous, the kids only have one interaction with them. For the rest of the story, they are either spying on Lord Fortescue or hiding from him. However, the evil man adds a non-fighting villain to the plot.

Talia and Lucas are likable, brave characters. Even though humans are not allowed into the forest, Talia and Lucas break the rule because it was the only way to warn the firebirds about Lord Fortescue. Later, the dragon agrees to help the firebirds, but only if Talia gives him her sparkly rock. Even though the Speaking Stone is special, Talia puts the firebirds’ needs first and gives the stone to the dragon. In the end, Talia recognizes that Lord Fortescue and his soldiers, “wanted to find gold, but they missed the real treasure that’s already here—the animals!”

The first book in the series, The Sky Unicorn, introduced Sophy and the magical stones. Even though Sophy makes an appearance in all of the books, readers do not need to read the stories in order. Each book focuses on a new main character, which adds interest to the series. The story uses easy vocabulary, simple sentence structure, and black and white illustrations to make The Baby Firebird accessible to readers. Illustrations appear every 2-4 pages and help readers understand the plot.

The Baby Firebird is a fast-paced, suspenseful chapter book that has wide appeal. Young readers will admire Talia for her kindness, bravery, and selflessness. Talia’s behavior shows the importance of protecting animals, including staying out of animals’ habitats. Readers who enjoy animal stories should also add Rainbow Magic Series by Daisy Meadows and the Enchanted Pony Academy Series by Lisa Ann Scot to their reading list.

“Maybe being ignored by a dragon is a good thing!” Lucas. –The Baby Firebird