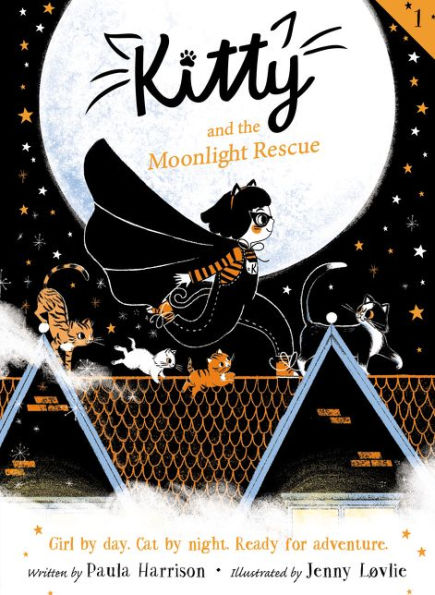 “You can choose to be whatever you want to be. But don’t let fear hold you back. You’re braver than you think,” Mom. –Kitty and the Moonlight Rescue

Kitty and the Moonlight Rescue

Every night, Kitty’s mom goes on an exciting adventure. Kitty’s mom has superpowers—she can see in the dark and talk to cats! She uses her superpowers to help those in need. Kitty knows that she also has catlike superpowers, but she isn’t ready to go on adventures yet.

One night, a friendly black cat named Figaro comes to Kitty’s window. Figaro and all the other cats are frightened by a terrible noise that’s coming from the clock tower. Kitty’s mom has already left and only Kitty can help. Kitty doesn’t like the night’s shadows. She isn’t sure that she’s ready to help, but Figaro believes in Kitty and her superpowers. With Figaro’s help, Kitty steps out into the darkness for an exciting moonlight adventure.

Cat lovers and adventure fans will love the new series Kitty. On her first adventure, Kitty reluctantly helps Figaro. During the adventure, Figaro encourages Kitty with kind words. However, that doesn’t always ease Kitty’s fear. Several times in the adventure, her mother’s words come back to her: “You’re braver than you think.” When she remembers her mother’s encouraging words, she is able to face her challenges.

Anyone who has ever been afraid of trying something new will relate to Kitty. Kitty and the Moonlight Rescue shows Kitty overcoming her fear to help several cats who are also afraid of something. However, with Kitty and Figaro’s help, both cats are able to overcome their fears. The rescued cats also make new friends. The story has just the right amount of cuteness, adventure, and suspense for younger readers.

Kitty and the Moonlight Rescue tackles the subject of fear in a kid-friendly manner. The fast-paced plot will keep readers flipping the pages until the very end. Each page has illustrations ranging from cat prints to detailed illustrations of Kitty and her activities. The illustrations are black and white with a pop of orange. Although most of the vocabulary is easy, younger readers may need help with some of the words. Some of the vocabulary is more advanced, such as gracefully, venturing, mysterious, and lingered.

Another positive aspect is Kitty’s family relationships. Even though Kitty’s parents play a small role in the story, both are portrayed in a positive light. After Kitty’s adventure, she sits down and has a picnic breakfast with her family. During the meal, Kitty tells her family about her adventures. The story also shows how it is always easier to be brave when you have someone with you.

Kitty and the Moonlight Rescue is a fun story for those who are ready for chapter books. The bright pictures and large text will keep the reader’s attention. Kitty’s adventures show her sneaking out of the house, walking across buildings’ roofs, and climbing a tall tower. In the end, Kitty is able to make new friends and solve the mystery. Kitty and the Moonlight Rescue is a purr-fect story for young readers who love animals. Cat lovers will want to add the Purrmaids Series by Sudipta Bardhan-Quallen to their reading list.

“You can choose to be whatever you want to be. But don’t let fear hold you back. You’re braver than you think,” Mom. –Kitty and the Moonlight Rescue