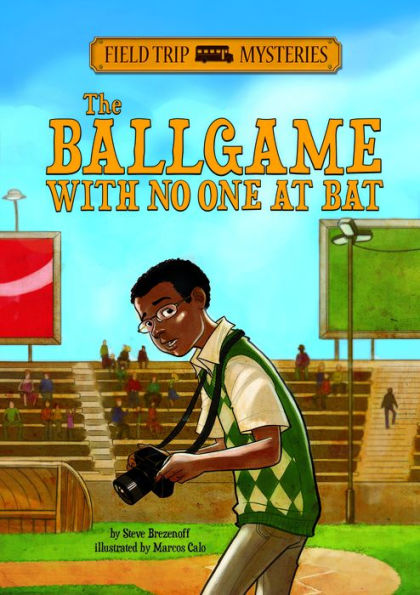 Egg’s sixth-grade class is going on a field trip to see the River City River Rats baseball game. Even though Egg doesn’t know a lot about baseball, he is excited to see the minor league baseball team play. From the fans to the concessions, Egg is ready to snap pictures at the stadium.

The class is surprised when the game is delayed because of a theft in the stadium. But Egg’s friends decide to use the time to look for clues. Who could have stolen the cash register from the concession stand? Is it one of the class’s chaperones? Egg and his friends are determined to look for clues and find the culprit.

As the title suggests, the story doesn’t show any baseball action. Instead, the action comes from Egg and his friends looking for clues, following suspects, and asking questions. Even though the game delay is unrealistic, the kids are able to solve the crime because Egg’s friend, Sam, uses her powers of observation. During their time at the stadium, several characters talk about the unhealthy junk food that is sold at the concession stand. One girl chastises her father for eating junk food, and the teacher admits to being “a junk food junkie!” The story’s message about making healthy snack choices is told in an over-the-top and humorous way.

The Ballgame With No One At Bat has beautiful full-colored illustrations that show Egg and his friends interacting with the suspects. Egg’s photographs are also included in the illustrations, which appear every 3 to 7 pages. In addition, some of the story quotes appear in oversized white letters on a black background. The graphic elements, large text, and illustrations break up the text into manageable parts. The book also includes A Detective’s Dictionary with some of the words used in the story.

Mystery-loving readers will be pulled into The Ballgame With No One At Bat by the beautiful illustrations and the high-interest topic. The story ends with an essay that Egg wrote about baseball superstitions. The easy-to-read format and easy vocabulary make The Ballgame With No One At Bat accessible to proficient readers who are ready for chapter books. Readers interested in a more developed mystery with baseball history should check out the Ballpark Mysteries Series by David A. Kelly