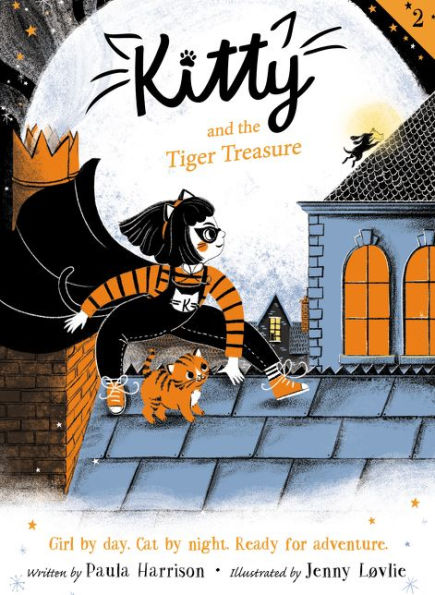 “Being here with my friends is the best adventure in the world,” Kitty. –Kitty and the Tiger Treasure

Kitty and the Tiger Treasure

Kitty’s family has secret superpowers. Kitty is a girl by day, but a cat by night. Kitty is excited to visit the museum’s new exhibit—the Golden Tiger statue. Legend says the Golden Tiger statue can grant people their heart’s desire. Kitty isn’t sure if the legend is true, but she doesn’t want her cat, Pumpkin, to miss out on the excitement.

Kitty and Pumpkin plan to sneak into the museum at night. As the two are looking through the museum, the museum cat Figaro startles them. Figaro thinks that Kitty and Pumpkin are thieves. As they talk, the real thief sneaks the Golden Tiger statue out of the museum. Can Kitty, Pumpkin, and Figaro work together to find the thief and return the statue?

Animal lovers of all kinds will fall in love with Kitty and the cat crew as they work together to stop a sneaky cat from stealing the Golden Tiger statue. Kitty and her friends meet a greedy cat who wants the statue for herself. Kitty uses the statue’s legend to scare the bad kitty, Precious, into giving up the statue. Kitty tells Precious, “But if it is true, I expect the spirits come in the dead of night and creep in through tiny cracks around the doorframe.” Even though a spooky event happens, the reader knows that Figaro, the museum cat, is the culprit—not a spirit.

Readers will enjoy Kitty, a spunky girl who values her animal friends. The fast-paced plot will keep readers flipping the pages until the very end. Each page has illustrations ranging from cat prints to detailed illustrations of Kitty and her activities. The illustrations are black and white with a pop of orange. Although most of the vocabulary is easy, younger readers may need help with some of the words. Some of the vocabulary is more advanced, such as encrusted, swished, pampering, civilized, and suspicious.

Kitty and the Tiger Treasure is a fun story for those who are ready for chapter books. The bright pictures and large text will keep the reader’s attention. Kitty’s adventures show her sneaking out of the house, walking across buildings’ roofs, and using a window to get into a pet store. In the end, Kitty and her cat crew are able to solve the mystery and return the priceless statue. However, Kitty knows that the most priceless treasure is her friends. Any young reader who has pretended to be a cat will enjoy reading the imaginative story, Kitty and the Tiger Treasure.

“Being here with my friends is the best adventure in the world,” Kitty. –Kitty and the Tiger Treasure