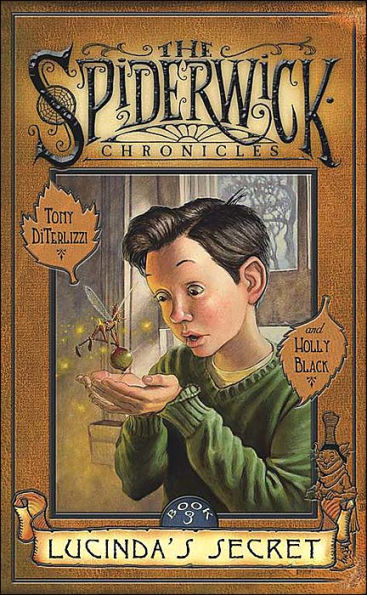 The Grace children are surrounded by problems. Thimbletack wants revenge. A hungry griffin is hiding in the carriage house. Creatures will stop at nothing to get Arthur’s Field Guide. Giving up the Field Guide isn’t an option, so the children go to see their Aunt Lucinda. But the more they learn about the fantastical world around them, the more they are convinced that the only way to stay safe is to discover more about the creatures who want to silence them.

Lucinda’s Secret takes the reader into the past and begins to answer the question: Why do the fairies want the Field Guide? The third installment of The Spiderwick Chronicles has several scenes that may scare younger readers. The children go to visit their Aunt Lucinda in an asylum, and they see several patients in straight jackets and a man “in a bathrobe giggled over an upside-down book.” Lucinda’s story of monsters that attacked her at night may also frighten readers.

Readers will be able to relate to the realistic sibling relationships. Even though the children work together and care about each other, they still squabble, fight, and disagree. Because the siblings often have conflict, the scenes when they work together are even more enjoyable. The story shows how relationships are always changing and that people can love each other and still disagree.

The introduction of new characters and new creatures adds interest to Lucinda’s Secret. Book three focuses on advancing the plot and giving important background information. However, this book also has less action than the first two books and readers will miss Thimbletack and the griffin, who do not appear in the story. The introduction of elves and a glimpse into the elves’ world adds a new, interesting element. Readers will want to continue the series to find out how the elves and Lucinda’s secret are connected.