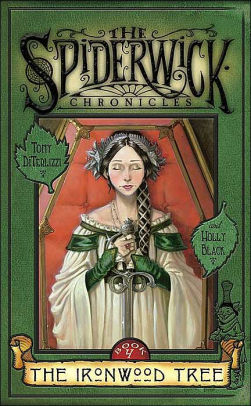 “Why would a faerie turn into Mallory and then cry in a girls bathroom?” Simon. —The Ironwood Tree

The entire faerie world wants Spiderwick’s Guide. Even if the Grace Children wanted to give the book away, they couldn’t because Thimbletack has hidden the guide. When Mallory disappears, Simon and Jared go in search of their sister. When the boys search the old abandoned quarry, dwarves imprison them. Is there any way for them to escape and save their sister?

Thimbletack and the griffin do not appear in the story, but new creatures are added. Although the story is entertaining, and suspenseful, some readers may wish that the different faerie creatures were incorporated into all of the books. Humor is added when neither Jared nor Simon wish to enter the girls restroom to look for Mallory. The ending takes a dark turn, and the unexpected killing of dwarves may disturb younger readers.

In the fourth installment of The Spiderwick Chronicles, Jared continues to struggle with anger and his mother’s misperception of him. Although Jared is trying to protect his family, he often falls into trouble. Jared worries that his mother will try to send him to live with his father, but his father won’t want him.

One of the best aspects of the series is the relationship between Jared and his siblings. Their realistic sibling relationship shows how each one has unique talents that can be used to defeat the faerie creatures. Although readers will be entertained by the faerie creatures, they will continue to read because they want to know what happens to the Grace children. Is there any way they can survive when the next faerie creatures come after them? The only way to find out is to pick up the fifth and last installment of the series.

“Why would a faerie turn into Mallory and then cry in a girls bathroom?” Simon. —The Ironwood Tree