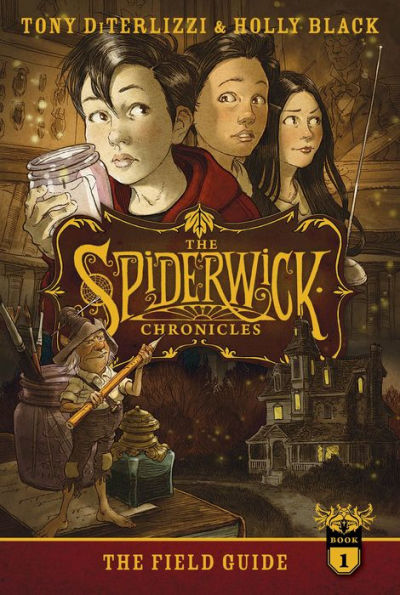 "So you need to stop letting your anger control you, Jared Grace," Mom. —The Field Guide

Jared, his twin brother, Simon, and their older sister, Mallory, are not happy about moving to a new town and into their Aunt Lucy’s dilapidated mansion. When a series of pranks happen and strange bruises start appearing on Simon and Mallory, Jared is blamed.

Then Jared stumbles upon Arthur Spiderwick’s Field Guide to the Fantastical World Around You. He believes the creatures in the book are real and that a boggart is the one causing all of the problems. No one else in the family believes the boggart is real. How can Jared prove that he isn’t responsible for destroying the house and hurting his siblings?

The story focuses on issues that children will be able to relate to including having problems with parents and difficulty expressing emotions. The plot focuses on Jared, who is having difficulty containing his anger. As Jared learns about the boggart, Jared is able to think about the boggart’s perspective. Jared doesn’t want to help the boggart, but “he knew what it was like to be mad, and he knew how easy it was to get into a fight, even if you were really mad at someone else. And he thought that just maybe that was how the boggart felt.”

The Spiderwick Chronicles: The Field Guide is a fantastical story that will engage even the most reluctant readers. The easy-to-read story has a fast-paced plot that deals with the difficult topic of divorce in a child-friendly manner. Black and white pictures and maps are scattered throughout the story, which will help readers picture the events in the story. When the story ends, readers will be reaching for the next book in the series.

The Spiderwick Chronicles is an excellent series; however, parents should read the reviews for all of the books before beginning the reading journey. Younger readers may not be ready for scary events that the Grace children face before their adventure comes to an end.

"So you need to stop letting your anger control you, Jared Grace," Mom. —The Field Guide