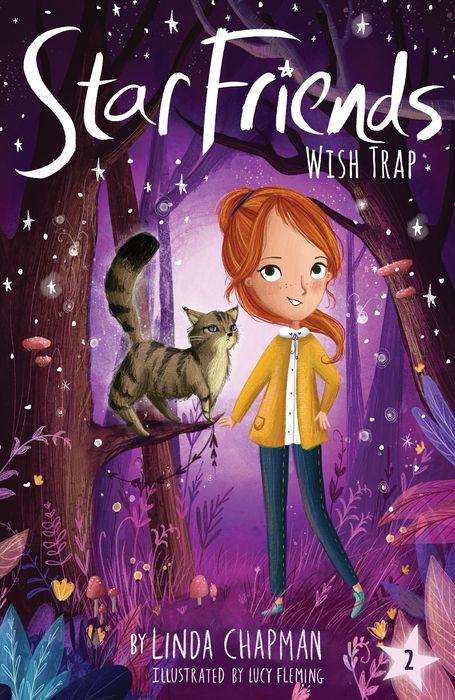 “The gnome must have a Wish Shade in it. Wish Shades work on people’s worst feelings, getting them to make wishes and then bringing them about in horrible ways,” Bracken. –Wish Trap

Do you believe in magic? Violet and her friends do! And when they meet the Star Animals, a whole world of magical adventures unfold in this new chapter book series featuring black and white illustrations throughout.

Violet and her star animal, a wildcat named Sorrel, must use their special powers to stop the forces of dark magic. But when a run of bad luck hits the local gym team, the Star Friends suspect that dark magic is behind it. Are their Star Magic skills strong enough to hold back the dark magic?

Unlike the first book in the series, Mirror Magic, Wish Trap has a scarier tone. When girls on the gymnastic team start getting injured, the Star Friends discover that a Shade tricked Paige, a girl who didn’t make it onto the gymnastics team, into making a wish. The Shade, who is trapped inside a garden gnome, starts hurting the girls on the gymnastic team. In a multichapter conclusion, the Star Friends try to capture the Shade after it locks two girls in a burning shed. No adults come to help the children escape the locked shed. Unrealistically, the Shade is defeated, and everyone is safe, but the Shade’s vicious behavior gives the story a dark tone that may leave readers with nightmares.

The Star Friends Series is a chapter book series that focuses on four friends—Mia, Lexi, Sita, and Violet—who are illustrated with different skin tones. The cute, black and white illustrations appear every two to seven pages. Even though Wish Trap will appeal to readers who are six and older, younger readers may have a difficult time with the more advanced vocabulary and the descriptions of dark magic.

While Mirror Magic focused on the girls meeting their Star Animal and learning about magic, Wish Trap focuses more on the friends, especially the tension between Mia and Violet. The animals rarely appear, but they are still instrumental in defeating the Shade. Readers will relate to the girls, who use their magic for good. Another positive aspect of Wish Trap is that it highlights the dangers of jealousy. Readers who love animals but want to avoid reading about dark magic should check out the Pet Rescue Adventures Series by Holly Webb and the Zoey and Sassafras Series by Asia Citro.

“The gnome must have a Wish Shade in it. Wish Shades work on people’s worst feelings, getting them to make wishes and then bringing them about in horrible ways,” Bracken. –Wish Trap