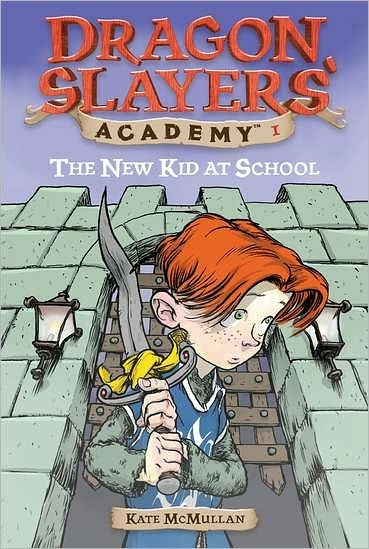 “The road a hero travels is never an easy one. I fear you shall need much luck,” the minstrel. –The New Kid at School

The New Kid at School

Wiglaf, the smallest boy in the family, gets pushed around by his brothers. Then a traveling minstrel tells Wiglaf he was born to be a hero. Wiglaf doesn’t think he will ever do anything heroic. When he reads the Dragon Slayer’s Academy ad posted on the village message tree, Wiglaf and his pet pig head to the academy. Even though Wiglaf can’t stand seeing any creature suffer—not even a fly—he’s convinced he can learn to slay a dragon. His first day at Dragon Slayer’s Academy will be a day he never forgets.

Twelve older brothers love to boss Wiglaf around. Much like Cinderella, Wiglaf must wash the dishes and do a never-ending list of chores. Wiglaf befriends the minstrel, who then teaches him how to read. Despite his small size, Wiglaf is convinced that he can be a hero. The kind, likable Wiglaf isn’t ashamed to be small, poor, or different than others. Instead, he uses his knowledge to defeat the dragon without using his sword, Surekill.

The New Kid at School mixes a little bit of silly magic, a talking pig, and a kind classmate to create a delightful story that makes readers giggle. Wiglaf’s adventure is told with humor while also highlighting the importance of work. This is shown when Wiglaf did not have any money to pay the academy’s tuition, so he offers to wash dishes. Another character empties eel traps in order to stay at the school. The conclusion has several surprises that will have readers eager to pick up the next book in the series, Revenge of the Dragon Lady.

The story uses simple vocabulary and short paragraphs to tell a fast-paced story. Readers may need help with some of the more complex sentences and the medieval language. For example, the dragon slayers are hoping to take the dragon’s “hoards” and Wiglaf is told to go “thitherwald.” Full-page black and white illustrations are scattered throughout the story. The detailed illustrations bring the characters to life with exaggerated facial expressions. A map of the academy and a DSA yearbook appear at the end of the book. Each yearbook page has a picture of a character as well as important information about him/her. Adventure-seeking readers will enjoy The New Kid at School and cheer for Wiglaf as he proves that you don’t need to be mighty in order to be a hero.

“The road a hero travels is never an easy one. I fear you shall need much luck,” the minstrel. –The New Kid at School