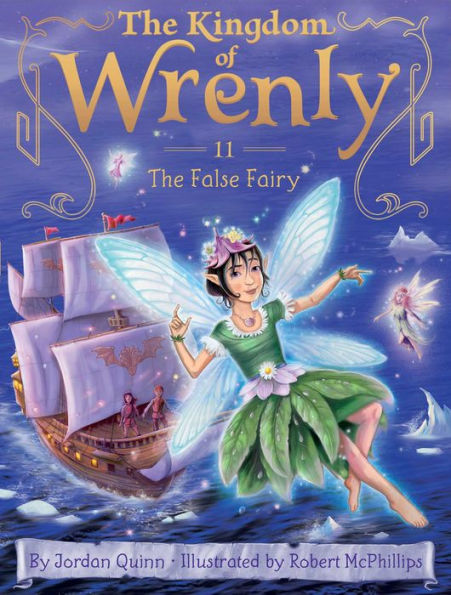 “This tiny creature is brave to talk to a beast of my size. She had no way to know that I am friendly. I would like to call her Brave Little Wings,” Siren. –The False Fairy

The Kingdom of Wrenly #11

In the eleventh fantastic adventure of The Kingdom of Wrenly series, a spell makes all but one fairy disappear. A mysterious spell has hypnotized the fairies on the island of Primlox, and now it is up to Prince Lucas and Clara to save the fairyland. Along with the last remaining fairy named Falsk, will the two friends find the missing fairies? Or is Falsk, who is famous for telling wild stories, leading Lucas and Clara into a trap?

The False Fairy uses adventure, friendship, and a little bit of magic to form an entertaining story that teaches a positive lesson. Like many people, Falsk likes to play jokes on others and tell stories. However, Falsk has told so many untrue stories and played so many pranks on others that no one trusts her anymore. When the fairies are in trouble, Falsk journeys to Wrenly to get help. Even though the Falsk is known as the False Fairy, the prince listens to her plight and helps her free her fairy friends.

The Kingdom of Wrenly series has a lot of positive aspects. Besides having a pet dragon, the prince is curious, helpful, and truly cares for other people. Even though he is royalty, the prince’s best friend Clara is the daughter of a baker. The adventurous friends work together to help Falsk find her friends. In the end, Falsk learns the danger of telling untrue stories and promises. “From now on, I will never play another trick. And I’ll be truthful, honorable, and kind.”

The story’s illustrations are beautifully drawn in black and white and appear on almost every page. The illustrations help readers visualize the characters and events in the story. Easy-to-read vocabulary, dialogue, and simple sentence structure make The False Fairy a perfect book for beginning readers. Although The False Fairy is the eleventh installment of a series, the previous books do not need to be read in order to enjoy the story.

“This tiny creature is brave to talk to a beast of my size. She had no way to know that I am friendly. I would like to call her Brave Little Wings,” Siren. –The False Fairy