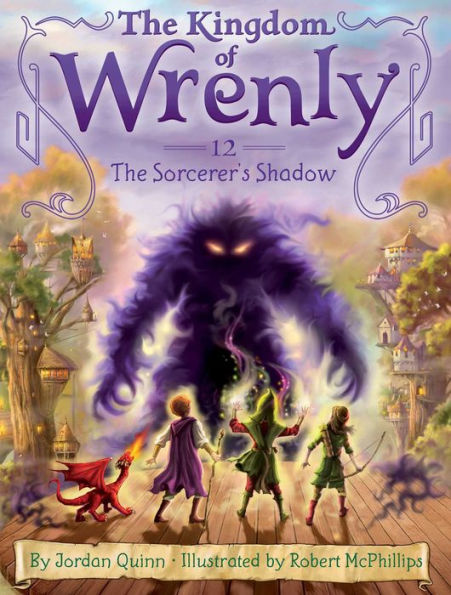 “The kids all think I am awkward and that bad luck follows me like a black cat,” Petros. –The Sorcerer’s Shadow.

The Kingdom of Wrenly #12

In the twelfth book from The Kingdom of Wrenly series, Prince Lucas and Clara go on an adventure in the forest realm of Trellis! All is not right in the forest realm of Trellis. Birds have left their nests, and bears have abandoned their dens, as mysterious magic threatens the natural order of the deep, dark woods. Together with a band of knights, Prince Lucas and Clara set out on an adventure that pits them against a dreaded sorcerer’s shadow. There’s only one problem: How can a shadow be defeated?

Unlike typical royalty, Prince Lucas interacts with everyone regardless of their station. When the prince and Clara see a kid named Petros being bullied, they jump in and help the boy. Even when others avoid Petros, the prince and Clara stick by his side and treat him kindly. The theme of the story is clear: “You must watch how you behave. No hurtful words or calling names. No hateful playground bully games.”

The Sorcerer’s Shadow has a darker, more frightening tone than previous books in the series. Because others have bullied Petros, his anger and hatred has transformed into a shadow beast that can turn people into wooden statues. When Petro gets angry, the beast grows and mimics Petro’s feelings. For example, when Petros cries, it begins to rain. Lucas and Clara help Petros realize that he has a gift—the gift of goodness, forgiveness, understanding, and love.

Readers will be able to relate to Petro who is upset when others treat him badly. The positive message in The Sorcerer’s Shadow is complicated because readers will need to understand the cause and effect of the events. Even though the message might not be clear, every reader will understand that words can be hurtful.

The story’s illustrations are beautifully drawn in black and white and appear on almost every page, which will help readers visualize the story. One of the characters is a lady knight, and although she does not have a large role in the story, she is portrayed in a positive light and appears in several of the illustrations. Easy-to-read vocabulary, dialogue, and simple sentence structure make The Sorcerer’s Shadow a perfect book for beginning readers. Although The Sorcerer’s Shadow is the twelfth installment of a series, the previous books do not need to be read in order to enjoy the story.

“The kids all think I am awkward and that bad luck follows me like a black cat,” Petros. –The Sorcerer’s Shadow.