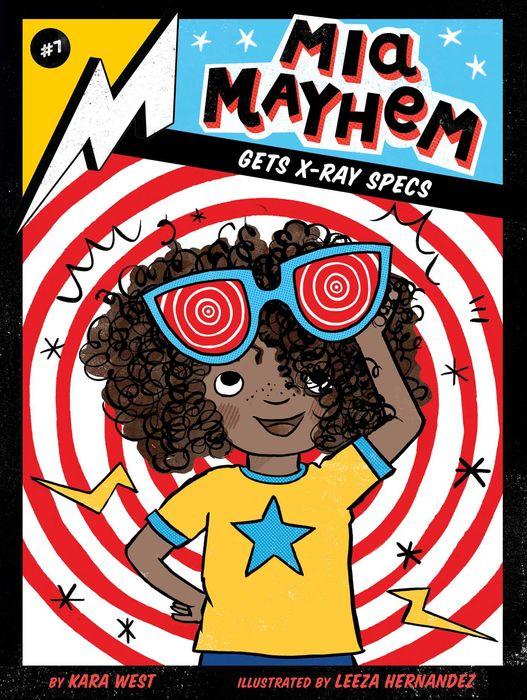 “Getting glasses isn’t really bad news. Think of it as getting a pair of cool new shades. To be honest I’ve always wanted a pair,” Eddie. –Mia Mayhem Gets X-Ray Specs

Mia Mayhem is learning to control her x-ray vision! She can’t wait to see through walls and crack secret codes. There’s only one problem: her glasses are way too big, clunky, and totally not cool! But she knows that if she wants to keep up with her classmates, she’ll have to adjust quickly. Will Mia be able to look past her obstacles and see things through?

A large part of the storyline follows Mia and her classmates as they try their supervision. Mia doesn’t want to admit that she doesn’t have x-ray vision. Instead of being truthful, she lies and says she sees “an elephant with a hot dog.” In the end, Mia learns that she “should have never guessed during the eye exam and pretended to know something when [she] didn’t.”

Mia Mayhem Gets X-Ray Specs has a diverse cast of characters which includes a girl who wears prosthetics. In addition, Ben and his seeing-eye dog, Seeker, make an appearance, which gives an added dose of interest. Readers will note how Seeker assists Ben. The story also shows how Ben’s blindness helps him hone his other senses, which in turn helps him with this supervision.

Young readers will enjoy the book’s format which has oversized text and black and white illustrations on every page. The large illustrations are often humorous, and they also help readers follow the story’s plot. Mia Mayhem Gets X-Ray Specs has an easy-to-understand plot that is perfect for emerging readers. However, some readers will need help with some of the advanced languages, with words such as connection, recognize, squinting, and officially.

Readers who are ready for chapter books will enjoy the silly storyline in Mia Mayhem Gets X-Ray Specs. Mia’s enthusiasm and friendliness make her a fun and likable protagonist. Even though Mia Mayhem Gets X-Ray Specs is part of a series, the books do not need to be read in order. While the story doesn’t have any life lessons, the Mia Mayhem Series will make emerging readers excited to see what type of mischief Mia gets into next, and with 12+ books in the series, readers will have plenty of adventure to look forward to.

“Getting glasses isn’t really bad news. Think of it as getting a pair of cool new shades. To be honest I’ve always wanted a pair,” Eddie. –Mia Mayhem Gets X-Ray Specs