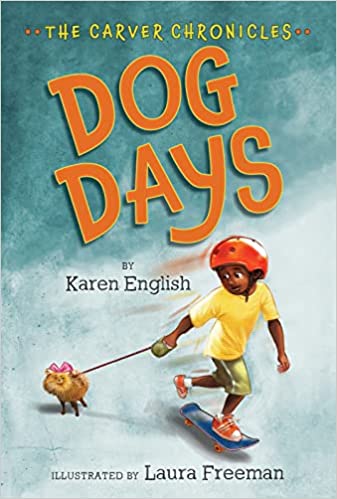 It’s tough being the new kid at Carver Elementary. Gavin had lots of friends at his old school, but the kids here don’t even know that he’s pretty good at skateboarding, or how awesome he is at soccer. And when his classmate, Richard, comes over and the boys end up in trouble, not only does Gavin risk losing his one new friend, but he has to take care of his great aunt Myrtle’s horrible little dog, Carlotta, as punishment.

To make matters worse, Gavin seems to have attracted the attention of the school bully. Will he be able to avoid getting pounded at the skate park? And how is he ever going to prove he’s cool with a yappy little Pomeranian wearing a pink bow at his side?

Gavin’s problem starts when he goes into his sister’s room to steal candy. While looking for the candy, Gavin’s friend, Richard, throws a snow globe that breaks. In order to earn enough money to pay for the snow globe, Gavin walks his aunt’s dog. However, Gavin never takes responsibility for his deeds. Instead, Gavin thinks “it isn’t his fault that Danielle’s snow globe got broken. Sure, he shouldn’t have been in her room—but then, she shouldn’t be keeping candy in her room to tempt him.”

Gavin’s problems continue when he walks Carlotta. Not only is he mean to the dog, but he also ties Carlotta to a park bench and leaves Carlotta alone so he can skate. When Gavin returns, he discovers that another dog has stolen Carlotta’s Chew-Chew. When Gavin sees the toy with another dog, Gavin asks the dog’s owner to return it, which the owner refuses to do. Gavin thinks, “It’s not fair. The guy is bigger than me. He’s older. And that means one thing. The older, larger person can tell a giant fib and the smaller person can’t do anything about it.” However, instead of being honest with his aunt, Gavin buys a new Chew-Chew for the dog. When he lies, “He’s proud that he’s managed not to tell a big lie.”

Dog Days will appeal to a wide range of readers, but parents may not like the story’s content. Even though Gavin is the narrator of the story, parents would not want their children to emulate Gavin’s behavior. He treats Carlotta terribly, he lies, and he blames his actions on others. To make matters worse, Gavin’s friend Richard is mean to Gavin and often ditches him to spend time with older boys. However, it’s not just the children in the book who behave badly. Gavin’s parents allow Aunt Myrtle to boss Gavin around, and in order to avoid Aunt Myrtle’s bad attitude, Gavin’s mom disappears which allows Aunt Myrtle to rule over Gavin.

Misbehaving and bratty kids give Dog Days some humor and suspense, but it also showcases bad behaviors. By reading the story, young readers will learn that telling small lies is okay. Because of the story’s lack of positive relationships, both with the adults and children, Dog Days lacks any educational value. If you’re looking for a fun dog-related book, there are plenty of other options including the Puppy Pirate Series by Erin Soderberg, the King & Kayla Series by Dori Hillestad Butler, and the Haggis and Tank Series by Jessica Young.