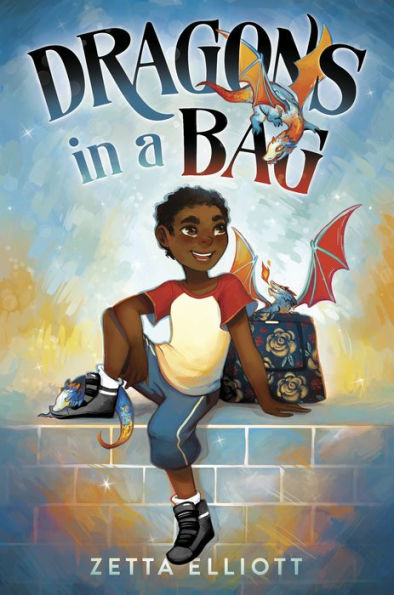 Other books by Zetta Elliott

“Never trust a first impression, Jax. It takes time to really get to know somebody,” Mama. —Dragons in a Bag

Dragons in a Bag

Jaxon’s mom leaves the nine-year-old with Ma, so she can look after him. While there, Jax is intrigued by a moving package. Ma reveals that she is a witch, and she has the duty to deliver three baby dragons to a parallel realm where magic still exists. Jax joins Ma on her journey, but when the transporter takes them to the Mesozoic era, Ma quickly sends Jax and the dragons back to Brooklyn. Jax is determined to keep the dragons safe until he can find Ma. Will Jax be able to protect the dragons and find Ma in another dimension?

Dragon in a Bag contains a cast of diverse characters, including an invisible man, a witch, a squirrel, and Jax’s friend from school. Black-and-white illustrations are scattered throughout the book and help the reader visualize the characters. When Jax is sent back to Brooklyn, he is forced to ask for help from adults who are strangers. Even though the adults in the story make some life decisions that others do not agree with, the adults’ decisions are not criticized or shown in a negative light.

The children in the story are able to share their knowledge about different subjects, and Jax clearly loves geography. The story teaches about animal imprinting and information about the Mesozoic era. Jax briefly enters the Mesozoic era; however, Jax’s visit is so short that the reader will be disappointed with the lack of dinosaur action.

Much of the story focuses on the interpersonal relationships between the adults; they all have different views of magic and what should be done with the dragons. This allows the reader to see different people’s perspectives and shows how people can have different views without being wrong. Even though the dragons are a main part of the plot, they stay in Ma’s purse for the majority of the story. Readers who pick up the story with the hopes of seeing some dragon action will be disappointed. In the end, Dragons in a Bag is an interesting story, but younger readers will struggle to stay engaged because the story lacks action.

Other books by Zetta Elliott

“Never trust a first impression, Jax. It takes time to really get to know somebody,” Mama. —Dragons in a Bag