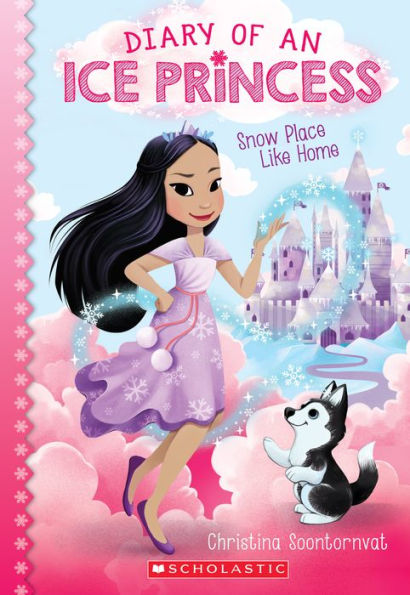 “Listen to your heart! Focus on what you’re doing!” Granddad. –Snow Place Like Home

Diary of an Ice Princess #1

Lina lives in the clouds and is a Windtamer, learning to control the wind and the weather. Lina loves her family and living in the sky, but she really wants to go to a regular school with her best friend, Claudia. Lina has promised her parents that she can keep her magical powers a secret from the other students.

Lina tries her hardest to keep her magical abilities under control, but every time she has a surge of emotions, she turns things to ice. Lina didn’t mean to make the boy’s bathroom into a skating rink. She didn’t mean to freeze the water fountain. But, even with the help of her granddad, Lina keeps making things cold! How can she learn to control her power? If she can’t learn to control her power, will she be banned from going to regular school?

Lina is a friendly, magical princess who struggles with controlling her emotions. Lina doesn’t mean to cause “magical disasters,” but she keeps making mistakes. Her granddad is convinced that Lina just needs to practice her magic more, but Lina has more to worry about than just pleasing her granddad. Lina and Claudia are working on a school science project, and Lina is afraid that her magic might lead to another disaster. Younger readers will enjoy characters who are diverse, friendly, and adventurous.

Snow Place Like Home is told in a diary format using simple vocabulary. The paragraphs contain three or fewer sentences and have a variety of graphic elements to break the text into small portions. The easy-to-read story has relatable conflicts as well as shows positive family interactions. No one expects Lina to be a perfect princess, and when she makes mistakes, both her best friend and her parents forgive her.

The cute illustrations include pictures of all of the characters, a husky puppy, and Lina’s activities. The bright pink-and-black illustrations appear on almost every page, and they include illustrations of binder paper with a list that helps readers understand the plot. For example, Lina makes her parents a list of why they should let her go to “Groundling school.” In addition to the illustration, Lina’s grandfather’s words are in big, bold text which will help the reader distinguish the speaker.

Readers who like friendship, magic, and science will enjoy Snow Place Like Home. Lina makes a quick reference about solids and liquids, and gives a recipe for “goop.” The end of the book explains why the “goop” behaves as it does. Parents will like the encouraging characters and the positive life lessons the story teaches. Scenes of a perfect pink palace in the sky are mixed with a regular school and kind characters to create a story that will please both parents and younger readers.

“Listen to your heart! Focus on what you’re doing!” Granddad. –Snow Place Like Home