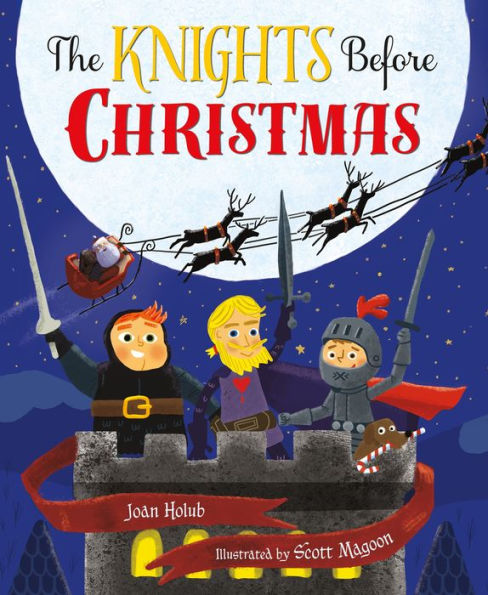 Other books by Joan Holub

“The invader was gone. And in his haste to flee, he’d forgotten his catapult. Yay! Victory! –The Knights Before Christmas

The Knights Before Christmas

‘Twas December 24th, and three brave knights were just settling in for the night when out on the drawbridge, there arose such a clatter! The knights try everything to get rid of this unknown invader (Santa Claus!), a red and white knight with a fleet of dragons . . .

Readers will laugh at the words and appreciate the adorable pictures of the knights trying to keep Santa Claus out of the castle. The picture book contains colorful, cartoonish pictures that bring detail to the knights’ activities. Younger readers may not understand all of the humor. For example, the knights “consult the king’s book on what good knights should do.” The illustration shows the king’s book, which says, “draw the bridge.” The next page shows a knight creating a drawing of a bridge. Even if readers do not understand all of the story’s humor, they will still want to read the book again and again.

The Knights Before Christmas is a festive, fun story that readers will want to pull out every Christmas season. The story contains elements that the young and the old will both enjoy.

Other books by Joan Holub

“The invader was gone. And in his haste to flee, he’d forgotten his catapult. Yay! Victory! –The Knights Before Christmas