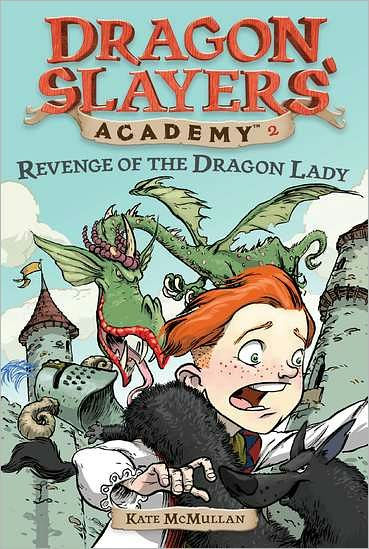 “You don’t need luck,” Angus said. “You need the right book. There are loads of dragon books in the DSA library.” –Revenge of the Dragon Lady

Revenge of the Dragon Lady

After killing a fierce dragon named Gorzil, Wiglaf returns to the academy and begins learning more about being a dragon slayer. But soon, a scout appears warning everyone about Seetha, Gorzil’s mother. Seetha wants to avenge her son’s death. Wiglaf isn’t ready to fight an angry dragon, so he searches for help and finds a librarian, a woman who thinks that “clothes make the man,” and finally a wizard who keeps making mistakes while casting spells.

In order to help Wiglaf, a wizard casts a courage spell that makes Wiglaf feel no fear. Wiglaf isn’t afraid to attack the “Mother of all Dragons” (or at least the mother of 3,684 of them). Will Wiglaf’s fearless attitude get him killed?

Revenge of the Dragon Lady brings more silly magic and dragon danger into Wiglaf’s life. The story adds in a fashion-forward woman that really believes the ridiculous new outfit is all Wiglaf needs to slay the dragon. The selfish headmaster also takes a larger role in the story, which is a fun addition to the story. Readers will want to read The New Kid at School first, because Revenge of the Dragon Lady has many of the same characters as the first book in the series.

Unlike many children’s books, the Dragon Slayers’ Academy doesn’t rely on bullying to create conflict. Instead, the children encourage Wiglaf and try to help him stay alive. The fast-paced story uses humor and suspense to keep readers engaged. Wiglaf is a kind-hearted boy who doesn’t want to use violence—even on a fire-breathing dragon. Instead of having sword fights and death, each dragon dies in an unrealistic, but comical way.

The story uses simple vocabulary and short paragraphs to tell a fast-paced story. Readers may need help with some of the more complex sentences and the medieval language. For example, Wiglaf’s friends tell him to “smite” the dragon, and Wiglaf tells someone to “unhand me.” Full-page black and white illustrations are scattered throughout the story. The detailed illustrations bring the characters to life with exaggerated facial expressions. A map of the academy and a DSA yearbook appear at the end of the book. Each yearbook page has a picture of a character as well as important information about him/her.

Adventure-seeking readers will enjoy Revenge of the Dragon Lady and cheer for Wiglaf as he proves that you don’t need to be mighty in order to be a hero. Readers who want more medieval fun should read the Roland Wright Series by Tony Davis.

“You don’t need luck,” Angus said. “You need the right book. There are loads of dragon books in the DSA library.” –Revenge of the Dragon Lady