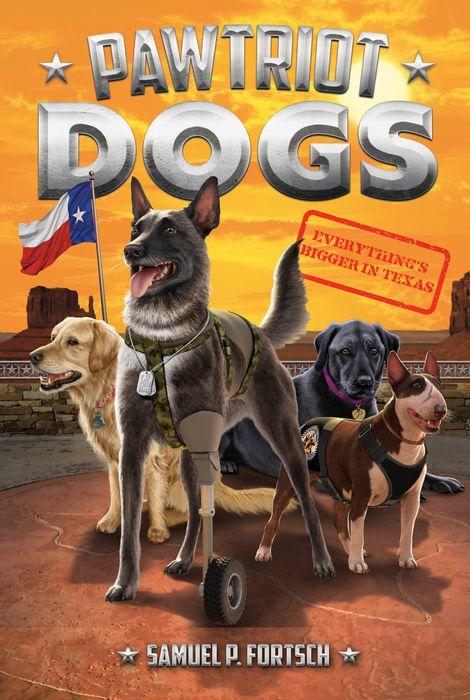 “Still, even in this terrible situation, I remind myself of my Soldier’s Creed: I will never accept defeat,” Rico. –Everything’s Bigger in Texas

Join former US Army rescue dog sergeant, “Rico” Ricochet, and his fellow Pawtriots on this larger-than-life mission as they travel to Texas to rescue a litter of kidnapped puppies. While in Texas, they will have to fight the Seven Pooches Gang, a giant spider, and a flash flood. Is there anyone they can trust in the Lone Star State?

Young readers may be confused by the complicated plot. For example, in order to save her puppies, Daisy lies to the Pawtriot dogs. When they discover Daisy’s lie, Daisy says she didn’t have a choice. The group is upset over the lie and Smither the snake says, “Everyone hasss a choice, you chosss to lie.” However, Rico stands up for Daisy by saying, “The end justifies the means.” While Rico encourages the others to forgive Daisy, he downplays Daisy’s responsibility for leading the group into danger.

The first book in the series, Save the Sanctuary, reinforces Army values in a clear manner. However, Everything’s Bigger in Texas’s message is more complex and may be confusing. For example, when the Pawtriot dogs are in a situation that looks hopeless, Rico thinks “false motivation is better than no motivation.” In addition, Dagr, the leader of the Seven Pooches Gang, runs away from danger. As he is leaving, he says, “Moral superiority doesn’t keep you alive.” While Rico never leaves his friends behind, the story doesn’t expand on Dagr’s comment.

Army sayings and terminology are used throughout the story. For example, when Rico needs the dogs to focus, he says, “‘Lock it up’ . . . That’s Army-talk for ‘be quiet.’” Each time an army word or phrase is introduced, Rico explains what it means. Plus, each chapter starts with the location, date, and military time which makes it easy to follow the timeline. Black and white illustrations appear every 1 to 6 pages and show the animals in action as well as some of the dangers they face including the ultra-big spider that may scare readers.

Even though Pawtriot Dogs is an illustrated chapter book, the story introduces some difficult concepts and explores revenge and body shaming. Revenge is Dagr’s main motivation for kidnapping Daisy’s puppies. Dagr wants to kill Chaps, but when Chaps dies Dagr wants to kill Chaps’ friends instead. One way or the other, the only way Dagr will be satisfied is when someone dies. The story also briefly introduces body shaming. Dagr makes fun of one of the dogs, calling him “tubby pup.” But Rico stops the teasing because he “can’t stand for bullying—especially when it’s about another dog’s body.”

Rico and the Pawtriot dogs face dangers with courage and work as a team in order to help Daisy. When the Pawtriot dogs disagree on helping Daisy, Rico reminds them, “But once you start taking the easy road, it’s almost impossible to ever take the hard one.” In the end, Daisy and her puppies are saved; however, the story ends with a cliff-hanger that will have readers reaching for the next book in the series, Into the Storm.

“Still, even in this terrible situation, I remind myself of my Soldier’s Creed: I will never accept defeat,” Rico. –Everything’s Bigger in Texas