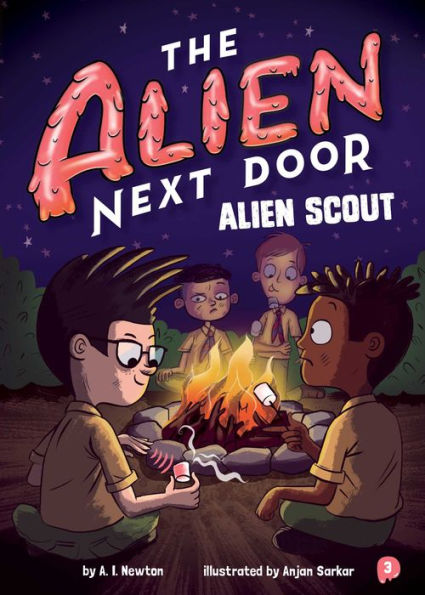 “Floating on water? Sleeping in the outdoors? Scaring people with words? Why are these things fun?” Quar. –Alien Scout

The Alien Next Door #3

Harris is the only person who knows Zeke’s secret—Zeke is an alien. When Harris decides to go on a Beaver Scout wilderness trip, he wants Zeke to go with him. Zeke is confused about all of the fun activities that will happen at camp, but he is excited to spend time with Harris and learn more about humans. The only problem is that Zeke is a little careless with his powers. When one of the other scouts becomes suspicious of Zeke, Harris isn’t sure how to keep Zeke’s identity a secret from the other scouts.

Zeke and Harris go on a fun adventure where Zeke learns all about scout camp. During most of the activities, Zeke isn’t shy about using his alien powers. For example, he floats to the top bunk, and he rows a canoe with his mind. Despite knowing the importance of hiding his true identity, Zeke continues to use his powers, especially to help others. When one of the scouts falls into a raging river, Zeke jumps in and saves him. The only suspense in the story comes from one camper who is suspicious and thinks that Zeke is different.

Even though the plot lacks suspense, seeing human activity from an alien’s point of view is entertaining, especially when Zeke gets confused by human speech. For example, when a camp counselor says, “Time to hit the hay,” Zeke wonders, “Why would I want to hit hay?” While Alien Scout isn’t as entertaining as the previous books in the series, readers will enjoy the relationship between Zeke and Harris.

Besides the fun topic, Alien Scout has a variety of other elements that are perfect for readers who are transitioning to chapter books. Each page contains a large black and white illustration that helps break up the text. The illustrations will help readers understand the wide range of emotions each character feels. The large font, simple vocabulary, short chapters, and dialogue make Alien Scout a fun book to add to a beginning reader’s book list.

“Floating on water? Sleeping in the outdoors? Scaring people with words? Why are these things fun?” Quar. –Alien Scout