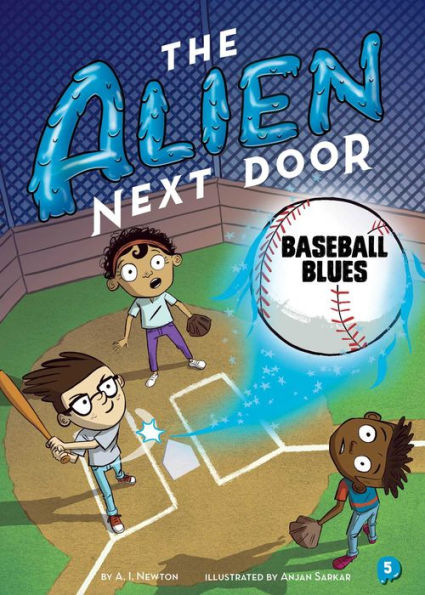 “Never take shortcuts to win. Practice your skills and do the best you can, and you’ll be a winner no matter what the score is,” Dylan. –Baseball Blues

The Alien Next Door #5

Baseball season brings excitement to Zeke, Harris, and Roxy. They are all on the same team and are looking forward to playing together. Zeke doesn’t know how to play baseball. After watching baseball on T.V., Zeke learns that he can use his alien powers to hit and pitch better than anyone else on the team. Harris thinks Zeke is cheating. He wants Zeke to play without using his powers, but Zeke doesn’t see what’s wrong with using his special abilities. Will the baseball season be the end of Zeke’s and Harris’s friendship?

Readers do not need to be a fan of baseball in order to enjoy Baseball Blues. Although the story focuses on baseball, it also touches on themes of friendship and doing what is right. Even though Zeke doesn’t know anything about baseball, he is one of the best players on the team. Harris thinks Zeke should improve his skills through practice instead of using his powers. When Zeke uses his powers to redirect the baseball, Harris tells him, “It’s a shortcut and it’s cheating. It’s not fair to the other players. You need to improve your skills through practice.” In the end, Zeke learns that playing fairly is more important than winning the game.

The story also models how to be a good friend. When Harris is upset with Zeke, he talks to him and explains why he is upset. Harris also worries “more about his friendship with Zeke than about Zeke using his powers.” To make matters more difficult for Harris, he can’t tell Roxy why is he upset with Zeke’s impressive baseball skills because he “promised to keep Zeke’s secret, even if it costs me his friendship.”

The fifth installment of The Alien Next Door series takes on a more serious tone as it teaches the importance of honesty. However, the readers will still enjoy the fast-paced story and the black and white illustrations that appear on every page. The pictures highlight Harris’s emotions as he tries to work through his problem with Zeke. Like the previous books in the series, the story uses large font, simple vocabulary, and short chapters which are perfect for students who are transitioning to chapter books. Baseball Blues will be a hit with younger readers.

“Never take shortcuts to win. Practice your skills and do the best you can, and you’ll be a winner no matter what the score is,” Dylan. –Baseball Blues