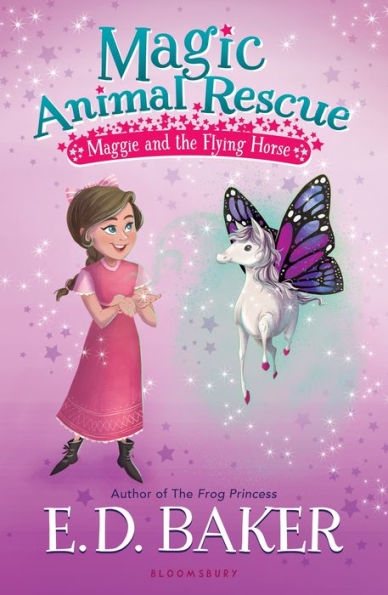 “You shouldn’t judge someone by the way he looks,” said the horse. –Maggie and the Flying Horse

Maggie and the Flying Horse

Eight-year-old Maggie isn’t like other girls who live in the Enchanted Forest. She notices magical animals around her that no one else does—like unicorns, griffins, and even talking horses.

One day, Maggie stumbles upon a tiny, injured flying horse. The only way to help the horse is to take it to a kindly stableman her grandmother once told her about. But in order to do so, Maggie must journey through the forest, which is full of dangerous trolls and goblins. Will Maggie reach the stable in time to save her new friend?

Fans of fairytales will fall in love with Maggie and the magical animals that live in the Enchanted Forest. Similar to Cinderella, Maggie has a mean stepmother who makes her do all of the work. She also has a mean stepbrother, who blames her for everything. Despite this, Maggie is always cheerful and kind to others. In addition, she is willing to help the injured horse even though she knows it will displease her stepmother.

Maggie and the creatures who live in the Enchanted Forest appear in black and white illustrations. The cute illustrations appear every 2 to 7 pages. Even though the trolls and the goblins are dangerous, they look cartoonish instead of frighteningly scary. One of the characters shares his journal with Maggie. The illustrated journal gives information about the magical animals and their habits. Readers who are not fluent will need help with some of the vocabulary. However, with short paragraphs, large text, and a simple plot, Maggie and the Flying Horse is accessible to readers ready for chapter books.

Maggie and the Flying Horse is the first in the Magic Animal Rescue Series and sets up the background for many adventures to come. With plenty of suspense, magical animals, and a hungry troll, Maggie and the Flying Horse will keep young readers entertained until the very end. Parents will appreciate Maggie, who is a kind protagonist and doesn’t complain despite her stepmother’s harsh treatment. The story is perfect for readers who love animals and fairytales. Readers will be eager to read the next book in the series, Maggie and the Wish Fish.

“You shouldn’t judge someone by the way he looks,” said the horse. –Maggie and the Flying Horse