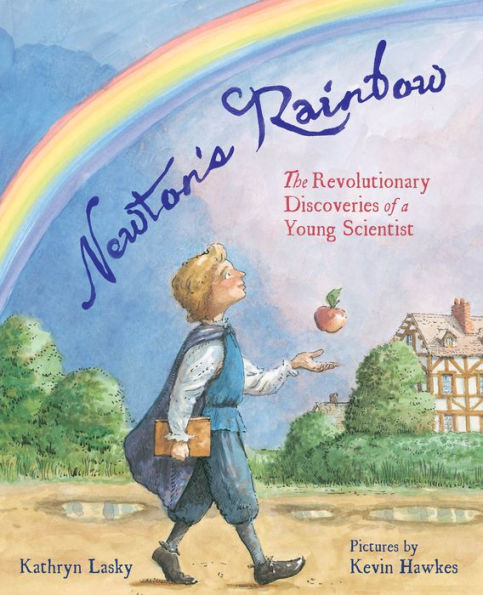 Newton’s Rainbow: The Revolutionary Discoveries of a Young Scientist

Famed for his supposed encounter with a falling apple that inspired his theory of gravity, Isaac Newton (1642–1727) grew from a quiet and curious boy into one of the most influential scientists of all time. Newton’s Rainbow tells the story of young Isaac—always reading, questioning, observing, and inventing—and how he eventually made his way to Cambridge University, where he studied the work of earlier scientists and began building on their accomplishments.

When a bubonic plague outbreak interrupted his formal schooling in 1665, he made discoveries that illuminated the mysteries of gravity, motion, and even rainbows—giving mankind a new understanding of the natural world that changed science forever.

While most people recognize Isaac Newton’s name, they do not know how extraordinary his discoveries were. Newton’s Rainbow details many of Newton’s experiments, including when he made a mouse-powered mill. “Isaac attached a string to a mouse’s tail and put the mouse on a treadmill. When he tugged on the string, the mouse ran.” Readers who love science will be intrigued by Newton’s experiments.

Newton studied many great men who came before him including Aristotle, Plato, Johannes Kepler, and Galileo Galilei. The book includes a one-paragraph biography of both Galileo and Kepler. As Newton studied these great men, he also conducted experiments to prove or disprove a hypothesis. While the story of an apple falling on Newton’s head was not true, Newton was able to develop the theory of gravitation. He also developed calculus and his theories became the basics for modern physics.

Newton’s Rainbow is a picture book that has large full-colored illustrations that show Newton’s activities and experiments. However, the book will need to be read by an adult because of the text-heavy pages and the difficult vocabulary. Some difficult words, such as philosophy and chamber pot, are defined in the text. While the book does an excellent job of explaining Newton’s impact on today’s world, Newton’s Rainbow may not appeal to young readers. However, the book would be an excellent resource for a research paper.

Newton’s Rainbow will help readers understand Newton’s contributions to math and science. Readers who love science should add Newton’s Rainbow to their must-read list. However, highly active children may find it difficult to sit through a reading of the book. To introduce young readers to science, parents should read these books to their children: Questioneers Collection by Andrea Beaty and the Zoey and Sassafras series by Asia Citro.