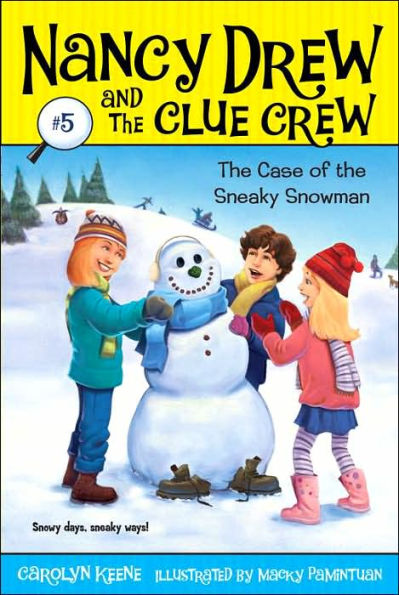 Other books by Carolyn Keene

Case of the Sneaky Snowman

Nancy Drew and the Clue Crew #5

Who wears a blue scarf and old rubber boots, and has broccoli for a nose? It’s Sherlock — Nancy, Bess, and George’s snowman! The girls are thrilled to be on winter vacation and take part in all of the season’s activities. Nancy’s friend Deirdre has even transformed herself into Madame Chocolata, a fortune-teller who predicts the future by reading hot cocoa marshmallows!

But the wintry days get a little too chilly after many of Deirdre’s visions come true. Sherlock even goes missing — just as predicted! Can the Clue Crew put a freeze on this mystery before it snowballs out of control?

Case of the Sneaky Snowman is a fast-paced story that will have readers trying to figure out the clues to the mystery. Even though the Clue Crew are trying to discover what happened to their snowman, the story also focuses on Bess’s upcoming skating performance. Madame Chocolata predicts that Bess will fall during the performance. Based on this prediction, Bess worries that she is a “loser” and a “baby” who should drop out of the show. However, in the end, Bess performs without making any mistakes.

Mystery lovers will enjoy keeping track of all of the clues and seeing if they can figure out who the culprit is. Nancy and her friends are able to discover the logical reasons behind all of the mysteries in the story. The conclusion wraps everything up nicely and will leave readers laughing. One positive aspect of the story is that Nancy and her friends stay within the bounds that their parents have set for them. Even though they want to solve the mystery, they don’t rush their investigation or jump to conclusions.

Black and white illustrations appear every 2 to 5 pages, which break up the text and help readers visualize the events in the plot. The last page of the book gives directions for making a snowflake out of beads. This modern version of Nancy Drew will entertain readers. Even though many characters appear throughout the Nancy Drew books, each story can be read as a stand-alone.

Readers should grab a blanket, a cup of hot chocolate, and snuggle up to the Case of the Sneaky Snowman. Readers who want to add more mystery to their reading list should check out the King & Kayla Series by Dori Hillestad Butler and The Mysteries of Maisie Hitchins Series by Holly Webb.

Other books by Carolyn Keene