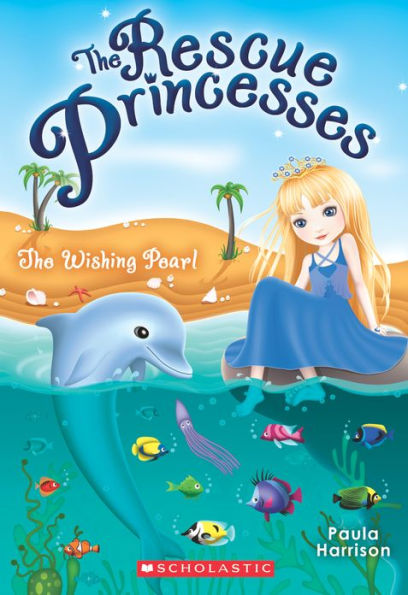 “We all have different gifts. That’s why we make such a good team,” Emily. –The Wishing Pearl

Princess Clarabel loves being a Rescue Princess. She and her friends are committed to saving animals in trouble wherever they may be!

When Clarabel finds an injured dolphin during Ampali Island’s Royal Regatta, she knows just who to call for help—her fellow Rescue Princesses! Her friends are brave, talented, and super smart. They’re so amazing in fact, she’s worried that she’ll fall behind, but Clarabel is about to discover that she has an incredible gift.

In the first book of the series, the princesses worked together to solve a mystery. However, in The Wishing Pearl, the princesses spend some of their time lurking around, trying to spy on a prince who is up to no good. At one point, they sneak into his room to look for clues. The princesses also try to avoid Queen Trudy because she wants the princesses to help prepare for an event. Instead, the princesses stay true to their desire to help injured animals by helping an injured dolphin.

Readers will enjoy the interaction between the princesses and relate to Clarabel, who worries that she isn’t as good as the other princesses. Throughout the story, the princesses help each other and encourage each other. Even though the princesses find a lost treasure, they never consider keeping the treasure for themselves. Instead, they give it to the queen to use for her kingdom. The Wishing Pearl has positive princesses, action, and teaches about the importance of taking care of animals.

“We all have different gifts. That’s why we make such a good team,” Emily. –The Wishing Pearl