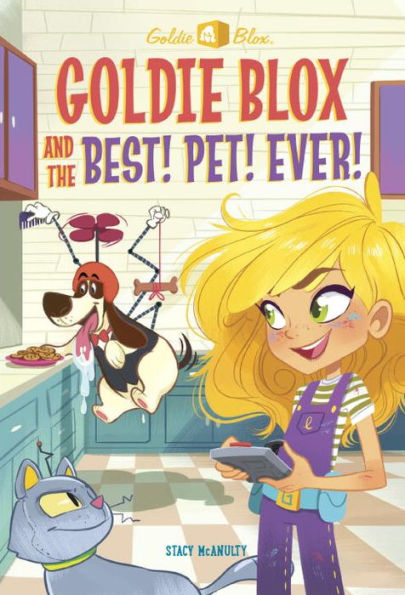 “Pets are disgusting. They go to the bathroom on the lawn and use their mouths to eat and clean. I think Bloxtown would be better off if it were animal free,” Zeek. – Goldie Blox and the Best! Pet! Ever!

Goldie Blox and the Best! Pet! Ever!

Bloxtown is hosting a pet pageant and the winner gets to name the new animal shelter. Goldie’s friend Li wants to name the animal shelter “Dr. Zhang Animal Shelter” after his grandmother. To help Li, Goldie, and her dog, Nacho, enter the contest. Even though Nacho spends his time napping and chasing his tail, Goldie is confident that she and her friends can teach Nacho everything he needs to know in order to win the contest.

When rich and snobby Zeek Zander enters the contest, Goldie is even more determined to win. Zeek doesn’t like pets and wants to call the shelter “Flea Bag Hotel for Ugly Dogs.” With the help of Zeek’s Butler Phone, Zeek sets out to get the best pet and win the race. Will Goldie and her friends be able to teach Nacho to follow commands? Will they be able to beat Zeek?

Goldie and her friends turn to engineering in order to get Nacho to run an obstacle course and follow commands. However, Nacho is more interested in sleeping and eating. In order to help Nacho get ready for the contest, Goldie and her friends make many gadgets, such as a tuxedo programmed to music. Younger readers will giggle at Nacho’s response to the gadgets and his crazy antics.

Goldie and her friends demonstrate positive friendship traits. One morning Goldie discovers Nacho missing. Her friends quickly jump in to help find Nacho. Ruby uses a drone to help find Nacho. However, Ruby used questionable methods to obtain the drone. Ruby says, “I may have borrowed one from HiBo Prep. And I may have hacked the system. And I may need you to keep it secret.” At another point in the story, Goldie enters a contest and she doesn’t win first place. But that doesn’t stop her from celebrating. The story emphasizes that winning a contest doesn’t make Goldie a winner. Instead, Goldie celebrates because “We built an awesome go-cart and had an amazing race. It was so much fun!”

Goldie Blox and the Best! Pet! Ever! will appeal to younger readers because of its humor. The story introduces readers to the idea of engineering; however, the story doesn’t explain the process that goes into making gadgets. The story is accessible to younger readers because it uses easy vocabulary, short paragraphs, and cartoonish black and white illustrations that appear every three to five pages. Goldie and her friends demonstrate positive traits such as perseverance and working together. Readers who want to delve into more books that mix science and humor should put The Data Set Series by Ada Hopper on their must-read list.

“Pets are disgusting. They go to the bathroom on the lawn and use their mouths to eat and clean. I think Bloxtown would be better off if it were animal free,” Zeek. – Goldie Blox and the Best! Pet! Ever!