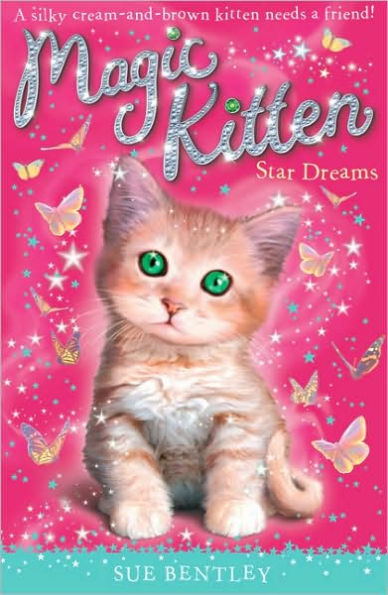 “But, she hadn’t had the chance to get to know her yet. Anyway, she liked to make up her own mind about people,” Jemma. –Star Dreams

Flame meets Jemma Watson in an alley, and this ordinary girl soon realizes that she is dealing with an extraordinary kitten. Flame’s magic powers come in handy as Jemma auditions for dance school while trying to look after her younger siblings. But the fun can’t last forever as Flame senses his enemies close by and must return to his kingdom. . .

Jemma loves having Flame, and she takes him everywhere she goes, including school. Flame often uses his magic to help Jemma out. One time, Flame’s magic is too much, which creates a funny food fight at school. Readers will fall in love with Flame as he uses sparkly magic to help Jemma with everyday problems.

Jemma loves to dance and is excited about trying out for a dance class. When the new girl, Fran, asks Jemma if she can come over, Jemma is nervous. Jemma knows that some kids think Fran is a snob. “But, she [Jemma] hadn’t had the chance to get to know her yet. Anyway, she liked to make up her own mind about people.” Because Fran has new clothes and her mom drives an expensive car, Jemma is worried to invite her over. Jemma doesn’t want Fran to see her run-down house; however, Jemma gets over her fear. When Fran comes over, she doesn’t make a comment on Jemma’s house.

Many readers will relate to Jemma, who worries about her family’s financial situation. However, Jemma doesn’t let this stop her from befriending Fran. Jemma is a positive character who helps her mother by babysitting and helping around the house. The story shows that a person’s character is more important than their financial status.

When Jemma performs, she makes a mistake in the routine, but she keeps going. Jemma was sure that her mistake would disqualify her, but in the end she has a happy surprise. The judges “were impressed because I didn’t let a small mistake get in the way.” Black and white drawings appear every 3-7 pages. Star Dream will engage readers as it teaches positive life lessons. Even though Star Dreams is part of a series, the books do not need to be read in order. Each book introduces a main character as Flame tries to hide from his uncle.

“But, she hadn’t had the chance to get to know her yet. Anyway, she liked to make up her own mind about people,” Jemma. –Star Dreams