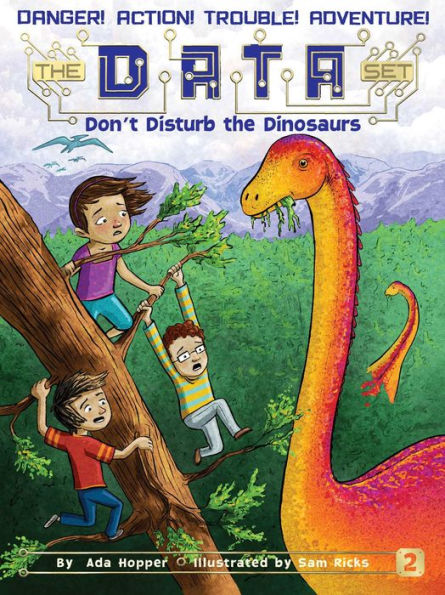 Other books by Ada Hopper

“Why does everything here want to eat me!” Cesar cried. –Don’t Disturb the Dinosaurs

Dr. Bunsen has undone it again when his time machine mistakenly beams the Data Set—Gabe, Laura, and Cesar—back to the prehistoric era. Before they can say, “Look out!”, Gabe, Laura, and Cesar find themselves dashing from flying pterosaurs, stegosaurus stampedes, and an Allosaurus on the hunt for an all-you-can-eat buffet.

Despite the dangers, the Data Set are determined to help a special friend while exploring ancient earth where dinosaurs roam the earth.

Don’t Disturb the Dinosaurs is an action-packed story that teaches facts about dinosaurs without overwhelming the reader with information. The Data Set works together to find a new home for Stego, who used to be a plastic toy. Readers will admire the friends’ willingness to go up against a hungry Allosaurus in order to help Stego. The diverse characters work together to fight danger. However, all of the danger is kid-friendly and won’t leave readers with nightmares.

Readers will enjoy reading about Gabe, Laura, and Cesar as they try to stay alive in Prehistoric times. Another lovable character, Dr. Bunsen, adds a little humor to the story. Even though Don’t Disturb the Dinosaurs is a part of a series, the books do not need to be read in order. The Data Set Series is a fun, imaginative series that also teaches readers. If your little reader can’t get enough of dinosaurs, they should add The Dino Files Series by Stacy McAnulty to their must-read list.

Other books by Ada Hopper

“Why does everything here want to eat me!” Cesar cried. –Don’t Disturb the Dinosaurs