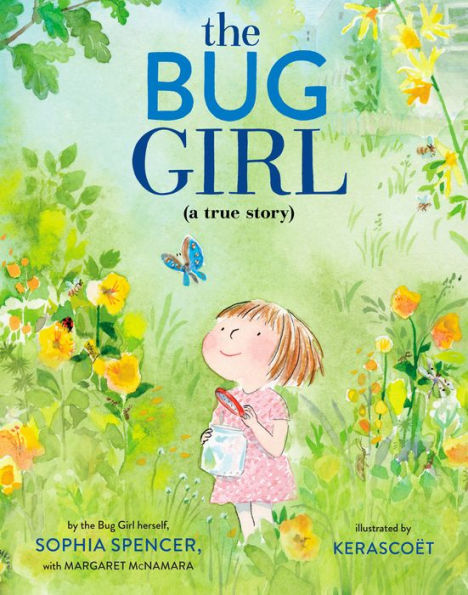 “I am happiest when it’s just me, a few green leaves, some drops of water, and a bug to keep me company,” Sophia. –The Bug Girl

The Bug Girl (a true story)

by Sophia Spencer with Margaret McNamara

Sophia loves bugs. When she was in kindergarten, some of her friends would hunt for bugs with her. But as she got older, kids began teasing her because she was a “bug lover.” Sophia was teased so much that she packed all of her bug stuff into boxes. This made her sad.

Then Sophia’s mom sent an email to a bug scientist. The entomologist Morgan Jackson wrote Sophia, encouraging her to keep studying bugs. When Morgan shared Sophia’s story, other bug scientists also helped Sophia see that loving bugs is not weird or strange. Today, Sophia is a fourth-grader who still loves bugs.

Each page of the picture book has large illustrations that look like watercolors. As Sophia’s classmates grow older and begin to tease her, the illustrations show Sophia’s sadness both in facial expressions and in dark colors. Most pages have 5 to 7 sentences as well as speech bubbles. Even with so few sentences, some pages are text-heavy which may make it difficult for younger readers to sit through a reading. Even though The Bug Girl is a picture book, the story is intended to be read aloud to a child rather than for a child to read it for the first time independently. The end of the book has general information on bugs as well as “super-cool bug facts.” In addition, the book explains the cycle of the butterfly and how to study bugs in the wild.

Any child who has been called weird will relate to Sophia’s struggle. Her story allows readers to see that having a unique hobby is not strange. Sophia realizes that there are many people who love bugs. This realization allows Sophia to enjoy studying bugs without feeling like there is something wrong with her. The Bug Girl will encourage readers to embrace being different and to continue doing what they enjoy, even if others make fun of them. The Bug Girl is a must-read for any child who loves bugs. If you’re looking for another book that encourages children to embrace their differences, add Angus All Aglow by Heather Smith to your reading list.

“I am happiest when it’s just me, a few green leaves, some drops of water, and a bug to keep me company,” Sophia. –The Bug Girl