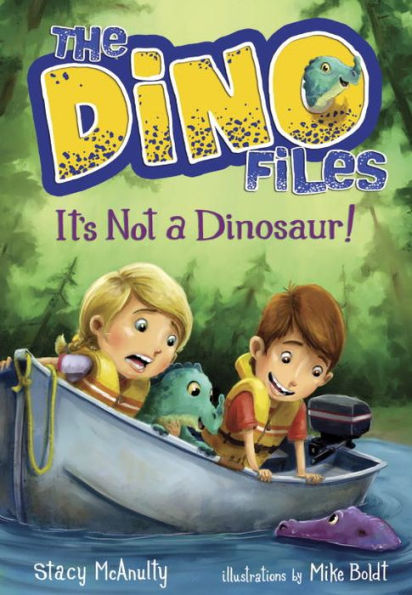 “People are scared. They think we’re going to let a dinosaur run around and eat people,” Aaron says. “But he’s an herbivore. He eats broccoli, not humans.” – It’s Not a Dinosaur!

It’s Not a Dinosaur!

A sneaky person takes a picture of Peanut, a baby dinosaur, and posts it on the internet. Now, there’s no way to keep Peanut a secret! Frank, Frank’s father, and Sara decide that they must take Peanut on a camping trip until the dinosaur’s new home is fenced. They pack up and head into the forest. While there, Frank’s dad wants to search for the Northosaurus he saw as a boy. The Northo isn’t a dinosaur, it’s a prehistoric reptile, but is he dangerous? The only way to find out is to find the Northo.

The third installment of The Dino Files is more suspenseful than the last. Not only does the group have to keep Peanut’s whereabouts a secret, they must also discover if the Northosaurus actually lives in the river. The story shows the fascination and fear that people might feel if dinosaurs were living. Although there is no violence, an angry group of people wants to capture the Northo because they think he’s dangerous. In the end, the Northo is left to enjoy his habitat. The interaction between Peanut and the Northo is a sweet addition to the story.

Readers who are new to chapter books will enjoy It’s Not a Dinosaur, with its easy vocabulary, short sentences, and black and white illustrations. The illustrations appear every 2 to 7 pages, which helps break up the text. This story also contains a glossary of dinosaur-related vocabulary at the back of the book.

Readers will enjoy the story’s suspense and will like learning about Peanut and the Northosaurus. For readers who dream of being a paleontologist, The Dino Files have dinosaur facts scattered throughout the series. It’s Not a Dinosaur! has a simple, suspenseful storyline that will help readers get ready for longer dinosaur stories such as the Dino Riders Series.

“People are scared. They think we’re going to let a dinosaur run around and eat people,” Aaron says. “But he’s an herbivore. He eats broccoli, not humans.” – It’s Not a Dinosaur!