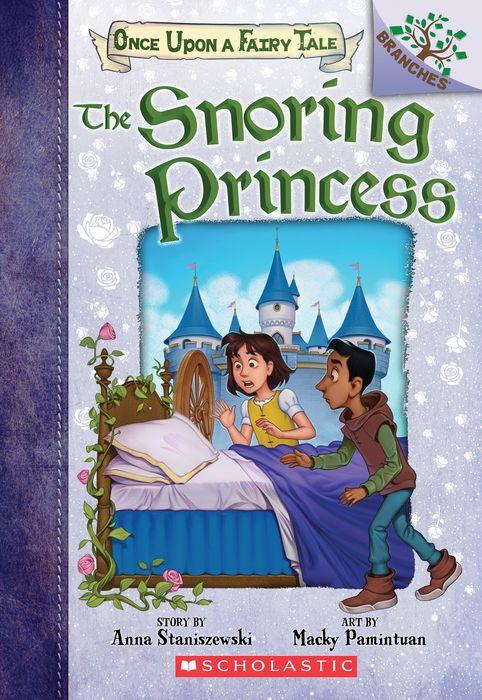 “I wanted to tell you both the truth,” Leon said. “But Mother made me promise to always keep Princess Rosa’s sleepwalking a secret.” —The Snoring Princess.

Once Upon a Fairy Tale #4

Princess Rosa is missing! The Princess disappears from her palace on the day a hundred-year sleeping spell is set to end. If Princess Rosa is not back by sunset, the spell will start all over again! Kara and Zed—along with a fairy from the palace—go looking for her. But can they find Princess Rosa before the sun sets?

Kara, Zeb, and a magical pig are off on their next mission—finding Zeb’s missing royal messenger bag. Along the way, they stumble across a tower and discover Princess Rosa is also missing. While The Snoring Princess is an imaginative retelling of Sleeping Beauty, the story is a little disjointed and most of the events do not make sense. For example, Kara and Zeb find Princess Rosa who continues to sleepwalk down a cliff and then float down a river all without hurting herself or waking up. While some of the events are silly, many of them are unbelievable even for a fairy tale.

The Snoring Princess is part of Scholastic’s Branches early chapter books, which have easy-to-read text and illustrations on every page. The story uses short descriptions and dialogue to keep the story moving at a fast pace. Black and white illustrations appear on every page and help break up the text into manageable sections. The engaging pictures will help readers follow the plot. Plus, the book ends with four reading comprehension questions and one activity. Even though The Snoring Princess is part of a series, each book can be read as a stand-alone.

Unfortunately, in The Snoring Princess, Kara and Zeb solve the mystery more by chance than by following the clues. However, young readers who are familiar with the Once Upon a Fairy Tale Series will enjoy seeing Kara and Zeb back in action. In the end, a lying fairy does the right thing by telling the truth. The conclusion reveals an unexpected villain, who isn’t evil. Despite the plot’s flaws, readers who are transitioning to chapter books will enjoy the book’s illustrations and the silly magical pig. If your child loves fairies, check out both the Candy Fairies Series by Helen Perelman and Disney: The Never Girls Series by Kiki Thorpe.

“I wanted to tell you both the truth,” Leon said. “But Mother made me promise to always keep Princess Rosa’s sleepwalking a secret.” —The Snoring Princess.